The motor is something I believe we are not unfamiliar with, recall the high school physics DC brush motor, the principle is the same for thousands of years, a permanent magnet (magnet) as the stator, a coil as the rotor, after energized to produce a magnetic field, according to the principle of “same-sex repulsion, opposites attract”, he will rotate around the stator. 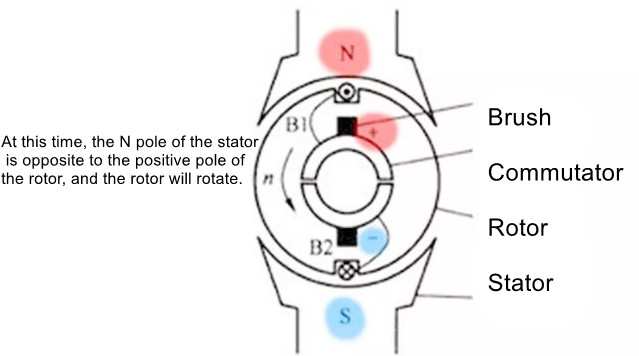 But right, after 180 degrees, you will find that the N pole of the stator is next to the S pole of the rotor, and the two of them start to attract each other, not to turn what? So this time you need to change the direction of the current through the rotor, but you can not change the direction of the power supply current, so this time you need to commutator and brush out.

The main role of the brush is to conduct the current, its positive and negative pole is connected to the positive and negative battery, the rotor every 180 degrees, the brush and commutator connection to turn, the original positive pole of the coil into negative, negative pole into positive, so alternating cycle, to achieve electromagnetic force to push the rotor coil continues to rotate. However, because the brushes have been brushing around on the commutator, it is bound to produce wear and tear, and bad luck will also produce sparks.

It refers to whether the rotor speed and the speed of the magnetic field generated by the stator are the same. To fully understand this issue, we need to understand the principle of these two types of motors.
Let us first look at the permanent magnet synchronous motor.
It is important to note that the permanent magnet synchronous motor is different from the textbook motor we used as an example above, in that its coil acts as the stator and the permanent magnet acts as the rotor, the opposite of the textbook one.
Most of the permanent magnets are made of neodymium iron boron material, which is called “king of permanent magnets” and is the highest magnetic material. This material is called “King of permanent magnetism” and it is the most magnetic material.
China’s rare earth reserves account for 71.1% of the world’s total, but currently they account for less than 23% of the world’s total. China has also taken on the role of exporting rare earths in the past few years, and Mr. Bang’s hometown is very good at handling rare earths, even opening a special college for rare earths. 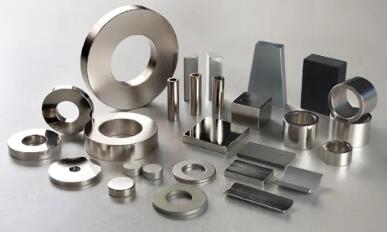 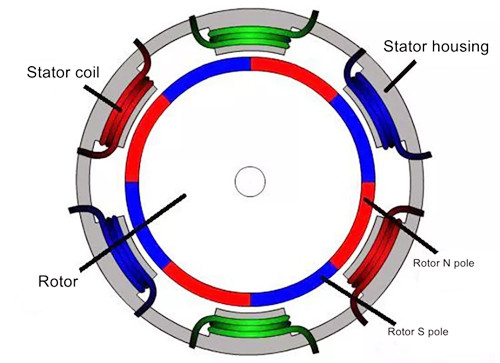 The outer circle of gray is fixed in the body of the stator housing, the above interval wound with red, green, blue three groups of six-turn coil, diagonal for the same group. And the middle white wheel turns for the rotor, connected with the output shaft to the tire.
Suppose we first energize the green coil, then it will produce a magnetic field similar to that of a bar magnet. If we energize all three sets of coils, the magnetic field of the three sets of coils will be equivalent to three bar magnets placed inside the stator in a “meter” shape, which will produce a rotating magnetic field, and then the rotor will be rotated by the magnetic force generated by the stator.

Note that the bar magnet in the above picture is only to help you understand the direction of the magnetic field of the energized coil, not that there is a magnet placed inside the motor!

In this case, after the change of the energized coil, the rotor can be immediately stressed, that is, the rotor speed is the same as the speed of the magnetic field generated by the stator, so it is called synchronous motor.

In addition, the rotor here is not simply a magnet, if so, it will lead to uneven force due to the single direction of the magnetic poles, so it is generally more magnets on the stator to form a stator magnetic group, so that the formation of a SN pole interval permanent magnet rotor.
This makes the rotor rotate steadily as there are magnets in any direction in the magnetic field. Of course, the coil is controlled by the rotor position sensor and the switch, and the three of them are not simply “you go on and I go off”, but a more complex on/off rule, so I won’t go into details here.

Next, we talk about AC induction motors. 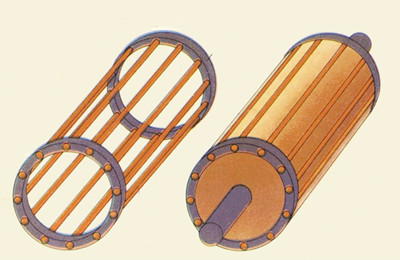 As you can see, AC asynchronous motors do not have permanent magnets, its rotor and stator are energized to produce a magnetic field.
Since three-phase alternating current is used, the coils are arranged symmetrically within the stator, one unit every 120 degrees, for a total of three units. The three individual windings are combined to form a 360-degree cylindrical stator.

This time the synthesized magnetic field becomes this: the size is fixed, the direction changes regularly.

OK, with this magnetic field, the rotor can finally be happy to rotate ~ but because the rotor of the AC asynchronous motor is squirrel cage type, it will do in the stator generated by the magnetic field we are familiar with junior high school physics “conductor cutting magnetic induction line motion”, resulting in an induced current. This current in the rotating magnetic field and the role of the amperage force, so that the conductor rotation, the superposition of these two rotations lead to the rotor speed and the stator generated magnetic field speed is not the same, that is, the meaning of “asynchronous”. See the following diagram for details.

In fact, not only Tesla, many European brands of electric vehicles like to use asynchronous motors, such as BMW i3, but Chinese and Japanese brands are not so, for permanent magnet synchronous motor or love deeply.
As for Tesla and other foreign brands to give up the obvious advantages of synchronous motors, there are several inferences, one is that the asynchronous motor is more adaptable to the harsh environment, and Tesla such higher positioning models may be more than the family car to experience intense driving and other conditions, then the asynchronous motor is not easy to demagnetize the characteristics of the very they fit.
The second issue is the core material of permanent magnet synchronous motor, rare earth, for our country and Japan, our country has good rare earth resources, and Japan is a big country of rare earth industry, the top three NdFeB companies in the world: Sumitomo Special Metals, Shin-Etsu Chemical Industries and TDK Group are all Japanese companies, the strength can be seen. European and American countries may not be able to use rare earth materials as they like.
The third is that Tesla has its own patents on asynchronous motors, circumventing the shortcomings of asynchronous motors, such as the technology of copper-core rotor, which is briefly introduced to you as follows.
Most of the current asynchronous motor rotor, that is, the squirrel cage, the material is aluminum, aluminum has a better electrical conductivity and lower melting point (660.4 ℃) cost also has advantages, but its efficiency is limited, it is difficult to go further, if the use of higher electrical conductivity of copper to make the squirrel cage, the efficiency of the motor will be significantly improved.
However, the high melting point of copper (1083°C) makes it difficult to manufacture copper-core rotors; and the cost of welding copper is also high, and the requirements for the strength of the welded joints are also very high.

▲Different metal resistivity
Tesla’s patented RotorDesignforAnElectricMotor, which uses a welded copper process, first inserted the copper bar into the rotor slot in the same way as the welded squirrel cage technical solution, after which the end rings were supposed to be welded, but Tesla manufactured a set of copper wedges with a silver-plated surface and inserted these wedges into the gap at the end of the copper bar, and after inserting the wedges, the wedges After inserting the wedges, welding is performed between the wedges and the copper bar, and this welding requires less cost and difficulty. After the welding is completed, the end rings are inserted. 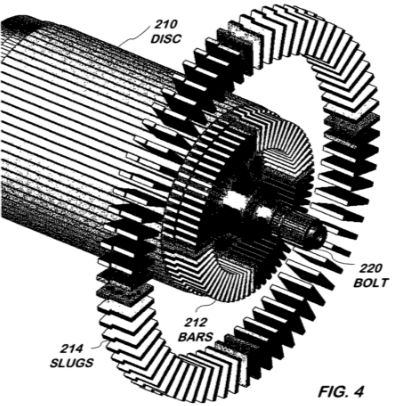 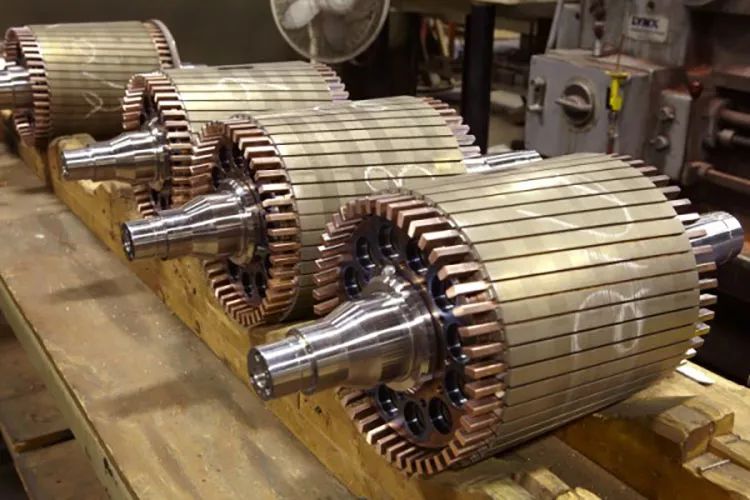 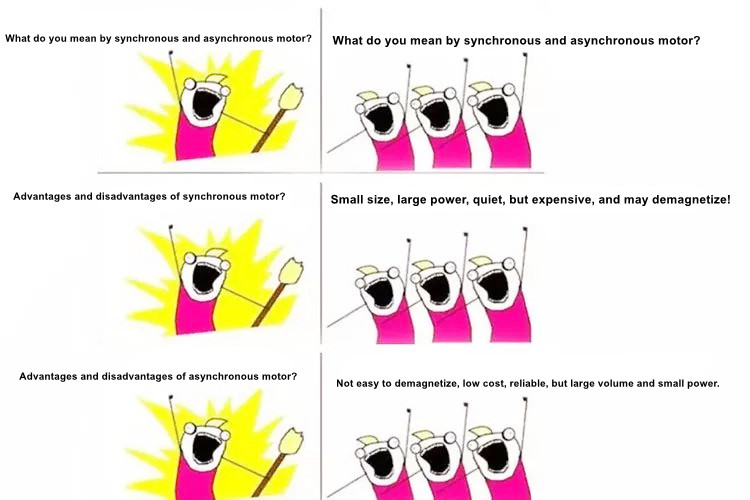