What is magnetic levitation motor

What is magnetic levitation motor? 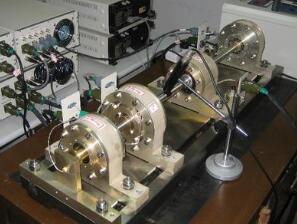 What is magnetic levitation technology?

Magnetic levitation technology, which is defined as the use of magnetic force to make the object along an axis or several axis to maintain a certain position of technical measures.
The system of magnetic levitation technology is composed of rotor, sensor, controller and actuator. The actuator includes electromagnet and power amplifier. Assuming that in the reference position, the rotor will deviate from its reference position due to a downward disturbance. At this time, the sensor detects the displacement of the rotor from the reference point. The microprocessor as the controller transforms the detected displacement into a control signal, and then the power amplifier converts the control signal into a control current, which generates a magnetic force in the executive magnet, This drives the rotor back to the original balance position. Therefore, whether the rotor is disturbed downward or upward, the rotor can always be in a stable state of equilibrium.
Because of the absence of mechanical contact, magnetic levitation has the following advantages: first, it has no wear and pollution, and can be used in vacuum and corrosive medium for a long time; Second, no mechanical friction, low power consumption, low noise, high efficiency, no need of lubrication and sealing, which can be used in high-speed engineering to solve the problems of lubrication and energy consumption in high-speed mechanical design.

Traditional magnetic bearings need 5 to 10 non-contact position sensors to detect the displacement of the rotor. But because of the existence of the sensor, the axial size becomes larger, the dynamic performance of the system is reduced, the cost is high and the reliability is low. At the same time, the high price of sensor also limits its promotion in industry. In recent years, combined with the latest achievements of magnetic bearing and sensorless detection, a new research direction, sensorless magnetic bearing, has been born.

The maglev train can run at a high speed of more than 500 km / h because it does not need to contact the track, and it has many advantages, such as smooth and comfortable operation, easy to realize automatic control, no noise, no harmful exhaust emission and so on.
China’s maglev train has been put into practical use, such as Shanghai Hongqiao Airport maglev line. However, due to the high success rate at present, the ability to realize self financing is weak, which limits its wide application.

Magnetic levitation is an ideal way to achieve long stroke and ultra precision motion control accuracy, which can meet the requirements of improving the accuracy of processing and measuring equipment.

Magnetic suspension centrifugal blower is a kind of fan. It is a new type of fan with high efficiency, energy saving and environmental protection, which is formed by integrating magnetic suspension technology and high-speed motor technology into traditional fans. It is widely used in factories, mines, tunnels and other ventilation; Urban sewage treatment; Wind tunnel wind source and other industrial projects.

The maintenance cost of commercial vehicle permanent magnet motor is high, and the speed can not be increased. If the magnetic levitation technology can be applied, the speed of commercial vehicle permanent magnet motor can be increased by 2 to 3 times, the weight of motor can be reduced a lot, the efficiency is relatively high, and the maintenance free can be realized. The vehicle power supply is direct current power supply, and the magnetic bearing can be powered directly.