What is inductance core material

What is inductance core material?

When selecting inductor core materials, appropriate materials should be selected according to the operating environment and performance requirements of the inductor.

The basic concept of core material

Powdered iron core is the common term for the core material triiron tetroxide, the main component is iron oxide, the price is relatively low, the saturation magnetic induction strength is around 1.4T: permeability range from 22-100, the initial permeability ui value with frequency change stability is good, DC current iteration performance is good, but high consumption under high frequency.
The material can be identified by the painting color, for example: 26 material: yellow body/white bottom, 52 material: green body/blue bottom. This type of material is cheap and is preferred if the inductance is not very high. You can choose the required material according to the inductance size and IDC requirements. 8 material has the best current resistance, 26 material has the worst, 18 material is in between, but 8 material has a low AL value. Powdered iron core materials are generally used to make small inductors that can withstand high currents.
This type of material is most commonly used in TOROID CORE, which generally has good current resistance characteristics. The surface impedance is between Mn-Zn and Ni-Zn, and has a certain conductivity, so the surface of the CORE body has an insulating coating layer, and the 26.18.52 materials in the TOROID CORE are mainly composed of iron powder. This type of material is often used for toroidal transformers, in addition to toroidal normal inductors.
These materials are easily magnetized by external magnetic fields, and the L-value of the finished product will increase by 3-5% after being magnetized, and the initial value will be restored after 3-5 days of resting.
TOROID CORE 8 material and SF53 material have strong current resistance and are often used for low inductance components with current resistance above 10A. (Commonly used in main board)
Powder core material is generally expressed as: T××-××, the two or three numbers in front indicate the outer diameter of the ring, calculation method: Outer diameter = ××*0.01 inch = ××*0.01*25.4 mm; the two (or one) numbers or letters behind indicate the material. For example: T106-26 indicates that the outside diameter is 1.06 inches (1.06*25.4=26.9 mm), and the material code is 26 for the magnetic ring. Powder core materials generally use different coating colors to distinguish different materials, the international standard of uniform coloring is as follows.

The material is very conductive, generally need to paint insulation, the coating layer is generally green, usually according to the characteristics required to select the material, for larger inductance usually choose Mn-Zn material, Mn-Zn material easy magnetic saturation, that is, IDC1 is very small, through the manufacturer’s catalog to find out the corresponding inductance coefficient (AL value), and then through the formula L = AL.N² to calculate the number of turns required, Mn- Zn material characteristics are not stable, usually the inductance range should be set at 30% or more! The material is affected by external temperature and pressure, so generally we usually set the sensitivity to XXuH MIN when we do this type of sample, if the customer has the sensitivity range requirements, we must use self-drying glue (1005A/1005B) to fix BASE or partition, remember not to bake!
This type of material is most commonly used for high inductance toroidal inductors. It is also widely used in EI, EE, UU type cores constituted by the filter. High frequency transformers, etc.; DR CORE is occasionally used.
Mn-Zn series materials have a high ui value and are suitable for low-turn high inductance (poor current resistance of toroidal inductors). ui values are often expressed as Rxx, e.g. R2.5K means ui value is 2500, and R5K, R7K, R8K, R10K, R12K, R15K, etc. Even if the same ui value is used, the size of the material is different, and the Al value is proportional to its effective cross-sectional area.
Mn-Zn material generally has a small surface impedance, almost equivalent to a good conductor of electricity, so this type of material must have a good insulation layer to isolate the coil body, otherwise it is very easy to produce high voltage breakdown between the primary and secondary coils. The influence of stress is extremely significant, and there is no fixed rule to follow. After baking at 100℃~130℃, its L value generally increases by 10~15%.
Mn-Zn ferrite material series is a kind of high frequency low power consumption material, which is characterized by low power consumption under the condition of high flux density at high frequency, and this material is mainly used in switching power supply, main power supply, main transformer and transformer core of TV, calculator display, CRT tube.

This type of material is most widely used in CHOKE inductor coils. Its main component is iron trioxide with a small amount of zinc oxide, nickel oxide, copper oxide, cobalt oxide and other trace elements. It is the core of choice for ordinary choke coils. These materials have different characteristics depending on the trace elements.
Ni-Zn rings are usually unpainted and require an impedance measurement, i.e. Z value. Sometimes inductance is also required. There are not many Ni-Zn rings used in our factory. TOROID products sometimes also use Ni-Zn material. It is generally painted green, the same color as MN-ZN material, so pay attention to the distinction.
Ni-Zn material has a very high surface impedance, is an electrical insulator, used to do EMI anti-magnetic interference (low frequency low impedance, high frequency high impedance).
Ni-Zn materials generally have a low saturation beam density (BS) and high coercivity (HC), can not withstand high currents and more hysteresis loss, with high surface impedance. 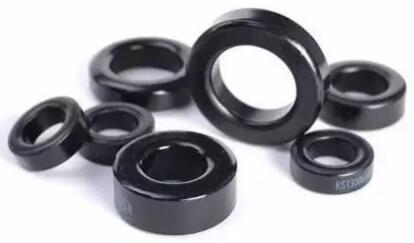 MPP is composed of 81% Ni, 2% Mo and Fe powder. The main features are: saturation magnetic induction strength value around 7500Gs; large permeability range from 14-550; lowest loss among powder cores; excellent temperature stability, widely used in space equipment, open-air equipment, etc.; magnetostriction coefficient close to zero, no noise generation when working at different frequencies. It is mainly used in high quality factor Q filters below 300kHz, induction load coils, resonant circuits, LC circuits with high temperature stability requirements, output inductors, power factor compensation circuits, etc. It is commonly used in AC circuits and is the most expensive among powder cores.
This type of material is generally denoted as CMXXX XXX The material IDC1 is very good and is often used for inductors requiring high current resistance, which is expensive and usually has a very low inductance coefficient. The appearance of the material differs from other materials in that the coating layer is generally printed with the first three digits indicating the outside diameter size of the CORE and the last three digits indicating the ui value of the CORE.
The main range of ui value: 26, 60, 75, 90, 125, 147, 160.
Main applications: high Q filters, load coils, resonant circuits, RFI filters, transformers, chokes, differential mode inductive filters, DC bias output filters. 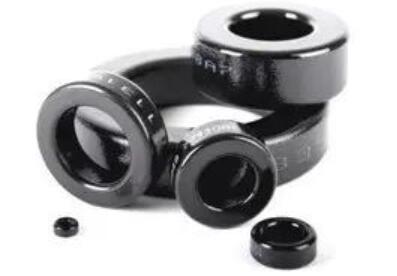 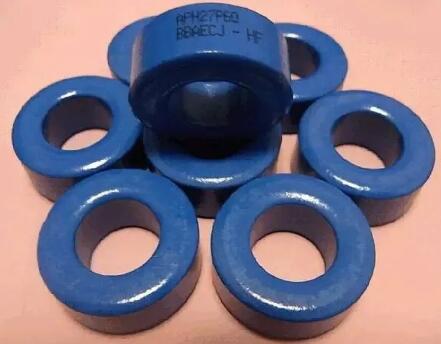 Self-resonant frequency plays a negative role in the performance of inductors. Self-resonant frequency is determined by the distributed capacitance and self-inductance, while the distributed capacitance is determined by the winding method. Minimizing the distributed capacitance is a very important goal to consider in the winding design. For the winding of a toroidal powder core, its effective capacitance is in parallel with the inductance. This distributed capacitance is the sum of the capacitance between the wires, between the layers and between the winding itself and the powder core.
A good winding design technique is to minimize the voltage between turns and try to minimize the distributed capacitance, such as dividing the winding into groups or using a winding row to effectively reduce the electrical capacity. In the winding and internal segmentation technique, it should be avoided that the input and output terminals are too close to each other, because the two parts have the largest potential energy between turns, and therefore the largest effective capacitance value is distributed. At the same time, the humidity index and the insulation constants of the potting and packaging materials will also increase the distributed capacitance value.
For precision wound cores, high time stability and good temperature repeatability are required. So the winding stress must be allowed to be released during its temperature cycle. In the magnetic powder core is wound coils must do as many temperature cycles as possible from room to 125°C. This temperature cycle is not only for stress release, but also for humidity removal. When the temperature cycle is completed, the final adjustment of inductance of the inductor must be done.
After winding the core must be kept dry and dipped, potted or sealed up as soon as possible. The potting compound material should be carefully selected to avoid some materials shrinking over time and temperature, which can affect stability. This effect can be improved by adding some bedding material to the outside of the core after winding.
For design engineers, it is important to understand the thermal aging conditions that cause core losses to increase. In high frequency conditions, eddy current loss is the main loss, while at low frequencies, magnetic leakage loss is the main loss. The proportion of the total loss in various forms of loss is also affected by the magnetic flux density. Affected by high temperature thermal aging is the eddy current part of the core loss.
The use of an open air gap within the ferrite core can reduce the effective magnetic permeability of the core, thus reducing the working flux density, but this air gap can cause serious localized air gap loss problems, especially significant when the frequency is higher than 100 KHz, in many cases, the air gap loss will exceed the core loss, because the air gap of the magnetic powder core is uniformly distributed, so this type of localized air gap loss basically is non-existent.
If any inappropriate core material or a core smaller than the specified size is selected, the core will experience temperature rise due to core losses that carry too high a frequency, which is more likely to lead to thermal failure.
Before selecting a suitable powder core material, than looking to determine the importance of inductor swing, the selection principle is to ensure that the powder core is not magnetically saturated as a prerequisite.
The best way to determine the “hot spot” of the powder core temperature is to punch a small blind hole in the core and insert a temperature differential coupling wire, which is required to be in close contact with the core to obtain accurate results. It is recommended that the unit assembly be run under the harshest conditions for 4-8 hours, or until thermal equilibrium is reached by running the conductive inductor. This is the best way to get the true maximum temperature of the magnetic powder core. It is important to note that magnetic powder cores have different thermal conductivity, which can create a temperature grading situation.
Powder cores have magnetic grading of the raw material powder, which means that when the powder is magnetized, they change slightly in size. This condition is irrelevant in applications where the audible frequency is >20KHz or higher, but in some 50Hz applications, the cores will have beeping noise appear, which is more pronounced in E-shaped cores than in toroidal cores, and also changes with changes in AC flux density.