What is a permanent magnet motor

What is a permanent magnet motor? 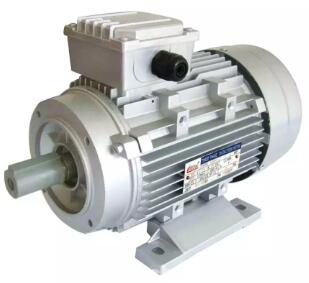 The permanent magnet brushless DC motor is a DC motor whose magnetic field is established by one or more permanent magnets. Its performance is similar to that of a separately excited DC motor with a constant excitation current. The speed can be easily adjusted by changing the armature voltage. Compared with separately-excited DC motors, it has the advantages of small size, high efficiency, simple structure, and less copper consumption. It is the main type of low-power DC motors. Fundamental
The permanent magnet brushless DC motor is composed of a motor body and a driver, and is a typical mechatronic product.
1. The stator windings of motors are mostly made into three-phase symmetrical star connection, which is very similar to three-phase asynchronous motors. Magnetized permanent magnets are glued to the rotor of the motor. In order to detect the polarity of the motor rotor, a position sensor is installed in the motor. The driver is composed of power electronic devices and integrated circuits. Its function is to receive the start, stop, and brake signals of the motor to control the start, stop and brake of the motor; receive position sensor signals and forward and reverse signals to control the reverse The on and off of each power tube of the variable bridge produces continuous torque; accepts speed commands and speed feedback signals to control and adjust the speed; provide protection and display, etc.
The main circuit is a typical voltage type AC-DC-AC circuit. The inverter provides a symmetrical alternating rectangular wave with a constant amplitude and equal frequency 5-26KHZ modulation wave.
The permanent magnet NS is alternately exchanged to make the position sensor generate U, V, W square waves with a phase difference of 120°, and combine the forward/reverse signal to generate an effective six-state encoding signal: 101, 100, 110, 010, 011, 001, through Logic component processing produces T1-T4 conduction, T1-T6 conduction, T3-T6 conduction, T3-T2 conduction, T5-T2 conduction, and T5-T4 conduction, which means that the DC bus voltage is sequentially applied to A+B-, A+C-, B+C-, B+A-, C+A-, C+B- up, so that every time the rotor rotates a pair of NS poles, the T1-T6 power tubes are combined according to the fixed combination Turn on sequentially in six states. In each state, only two-phase windings are energized, and one state is changed in turn. The magnetic field axis generated by the stator winding rotates in space by 60° electrical angle, and the rotor follows the stator magnetic field to rotate equivalent to 60° electrical angle in space. The rotor is in the new position Above, make the position sensor U, V, W generate a set of new codes according to the agreement. The new codes change the conduction combination of the power tube, and make the magnetic field axis generated by the stator winding move forward by 60° electric angle. The DC motor will generate continuous torque and drag the load for continuous rotation. Because the commutation of the permanent magnet DC motor is generated by itself, rather than forced by the inverter, it is also called a self-controlled synchronous motor.
2. The position sensor code of the permanent magnet brushless DC motor makes the energized two-phase winding composite magnetic field axis position ahead of the rotor magnetic field axis position, so no matter where the starting position of the rotor is, the motor will generate enough power at the moment of starting. Starting torque, so no additional starting winding is required on the rotor.
Since the axis of the stator magnetic field can be regarded as perpendicular to the axis of the rotor, when the iron core is not saturated, the average electromagnetic torque produced is proportional to the winding current, which is the same as the current-torque characteristic of a separately excited DC motor.
The motor torque is proportional to the average winding current:

The difference of the back EMF between the two phase windings of the motor is proportional to the angular velocity of the motor:

So the average current in the motor winding is:

Among them, Vm=δ·VDC is the average value of the voltage applied between the motor wires, VDC is the DC bus voltage, δ is the duty cycle of the modulation wave, and Ra is the winding resistance of each phase. From this, the electromagnetic torque of the DC motor can be obtained:

Fundamental
The stator of the brush motor is equipped with fixed main magnetic poles and brushes, and the rotor is equipped with an armature winding and a commutator. The electric energy of the DC power supply enters the armature winding through the brush and the commutator to generate armature current. The magnetic field generated by the armature current interacts with the main magnetic field to generate electromagnetic torque, which makes the motor rotate to drive the load. Due to the existence of brushes and commutators, the brushed motor has a complex structure, poor reliability, many failures, large maintenance workload, short life, and commutation sparks are prone to electromagnetic interference.
The working principle diagram of a brushed DC motor is shown in Figure 2-1. There are magnets in the fixed part of the brushed DC motor, here called the main pole; the fixed part also has brushes. The rotating part has an annular iron core and a winding wound on the annular iron core.
The fixed part (stator) of the two-pole brushed DC motor shown in Figure 2-1 is equipped with a pair of DC-excited stationary main magnetic poles N and S, and an armature core is installed on the rotating part (rotor). There is an air gap between the stator and the rotor. An armature coil composed of two conductors A and X is placed on the armature core. The head and end of the coil are respectively connected to two arc-shaped copper plates, which are called commutating plates. The commutator segments are insulated from each other, and the whole composed of commutator segments is called a commutator. The commutator is fixed on the rotating shaft, and the commutator segments and the rotating shaft are insulated from each other. A pair of fixed brushes B1 and B2 are placed on the commutator segment. When the armature rotates, the armature coil is connected to the external circuit through the commutator segment and the brushes.
Species

The hub-type gear-driven brushed DC motor is composed of a disk-shaped armature brushed motor and a gear reduction and transmission system. The disk armature is a high-speed rotor. The structure of a geared brushed DC motor is shown in Figure 2-2. The torque of the motor is transmitted to the first-stage gear through the shaft, and the hub shell is driven to rotate through the gear reduction.
The disc-shaped armature of the brushed geared hub motor is thin, small in size, light in weight and easy to install. After the winding is prepared, it is formed by hot pressing with resin and glass fiber. Due to the friction between the brush and the commutator and the gear meshing and decelerating during operation, the running sound of the brush motor is louder than the brushless motor. .
Due to the improvement in the design of the brush motor, there is no need for gear reduction, which can achieve low noise and low cost. Many low-priced electric bicycles widely use this motor. However, this kind of motor has small torque, small load, poor climbing ability, and consumes a lot of power during use. Mechanical brush inverters are still used. The motor life problem has not been solved, so medium and high-end electric bicycles are not used. This kind of motor.

The permanent magnet synchronous motor uses permanent magnets to provide excitation, which makes the motor structure simpler, reduces the processing and assembly costs, and saves the slip ring and brush that are prone to problems, which improves the reliability of the motor operation; and because there is no need for excitation Electric current, no excitation loss, improve the efficiency and power density of the motor.
The permanent magnet synchronous motor is composed of stator, rotor and end cover. The stator is basically the same as an ordinary induction motor, and uses a laminated structure to reduce the iron loss when the motor is running. The rotor can be made solid or laminated. The armature winding can adopt concentrated full-pitch winding, distributed short-pitch winding and unconventional winding. 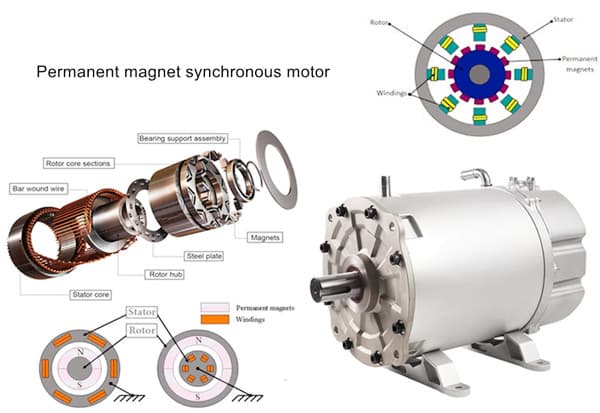 The relationship between magnetic steel performance and motor performance

The influence of remanence

The influence of coercivity

In the process of motor operation, there is always the influence of temperature and reverse demagnetization. From the perspective of motor design, the higher the coercive force, the smaller the thickness direction of the magnet can be, and the smaller the coercive force, the greater the thickness direction of the magnet. But after the magnetic steel exceeds a certain coercive force, it is useless, because other components of the motor cannot work stably at that temperature. If the coercivity meets the demand, the standard is to meet the demand under the recommended experimental conditions, and there is no need to waste resources.

The influence of squareness

Squareness only affects the straightness of the efficiency curve of the motor performance test. Although the straightness of the motor efficiency curve has not been listed as an important index standard, this is very important for the continuous travel distance of the in-wheel motor under natural road conditions. important. Because of the different road conditions, the motor cannot always work at the maximum efficiency point. This is one of the reasons why the maximum efficiency of some motors is not high but the continuous travel distance is long. A good in-wheel motor should not only have a high maximum efficiency, but also the efficiency curve should be as level as possible. The lower the slope of efficiency reduction, the better. As the market, technology and standards of in-wheel motors mature, this will gradually become an important standard.
To understand what the directionality of a magnetic material is, please click on an article to understand the hysteresis curve (magnetization curve, demagnetization curve, intrinsic curve, magnetic energy product curve)

The impact of performance consistency

Inconsistent remanence: even some of the ones with particularly high performance are not good. Due to the inconsistency of the magnetic flux of each unidirectional magnetic field section, the torque is asymmetry and vibration occurs.
Inconsistent coercivity: In particular, if the coercivity of individual products is too low, it is prone to reverse demagnetization, which leads to inconsistent magnetic fluxes of the magnets and vibration of the motor. This effect is more significant for brushless motors.

The influence of magnet thickness

When the inner or outer magnetic circuit ring is fixed, when the thickness increases, the air gap decreases and the effective magnetic flux increases. The obvious performance is that the no-load speed decreases under the same remanence, the no-load current decreases, and the maximum efficiency of the motor improve. However, there are also disadvantages. For example, the motor’s commutation vibration increases and the motor’s efficiency curve becomes relatively steep. Therefore, the thickness of the motor magnet should be as consistent as possible to reduce vibration.

The influence of magnetic steel width

The influence of magnetic steel chamfer size and non-chamfer

If the corner is not chamfered, the rate of change of the magnetic field at the edge of the magnetic field of the motor will be large, causing the pulse of the motor. The larger the chamfer, the smaller the vibration. However, chamfering generally has a certain loss of magnetic flux. For some specifications, the magnetic flux loss is 0.5~1.5% when the chamfer is 0.8. When the residual magnetism of the brush motor is low, appropriately reducing the chamfer size is beneficial to compensate the residual magnetism, but the pulse vibration of the motor increases. Generally speaking, when the remanence is low, the tolerance in the length direction can be appropriately enlarged, so that the effective magnetic flux can be improved to a certain extent, so that the performance of the motor is basically unchanged.