Therefore, it is very important to understand the structure, working principle and performance advantages and disadvantages of the drive motor in order to select the type of motor for new energy vehicles.

In the formula, NS is the rotational speed of rotating magnetic field (also known as synchronous speed), R / min; F is the three-phase AC frequency, Hz; P is the number of magnetic poles. For the drive motor that has been designed and produced, the logarithm of magnetic level has been determined, so the factor determining the rotation speed of magnetic field is three-phase AC frequency. Since the frequency of power grid in China is f = 50 Hz, there is a linear relationship between the speed of motor and the number of poles. 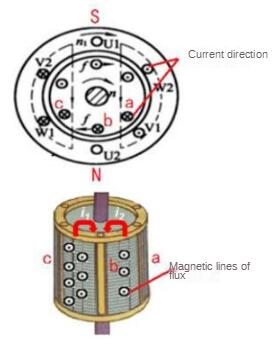 The advantage of AC asynchronous motor is that the output torque can be adjusted in a wide range, and it can be forced to increase the output torque in a short time when accelerating or climbing. The electric drive vehicle of permanent magnet synchronous motor usually increases the torque by increasing the gearbox mechanism to improve the speed. But the disadvantage of AC asynchronous motor is that it needs more current to produce unit torque because of unilateral excitation and larger starting current, and there is reactive excitation current in stator, so it consumes more energy and lags behind power factor than permanent magnet synchronous motor; Overload often occurs in heavy-duty drive; The structure is relatively complex, its control technology requirements are high, and the manufacturing cost is high; The power density is relatively low. At present, the electric drive vehicles developed in the United States mostly use AC asynchronous motor as the driving motor.

According to Faraday’s law of electromagnetic induction, a part of the conductors in the closed circuit are provided by the three-phase stator winding, and the magnetic field is provided by the permanent magnet on the rotor. When the external torque drives the rotor to rotate, a rotating magnetic field is generated, which cuts part of the conductors in the three-phase stator winding, and induces three-phase symmetrical current. At this time, the kinetic energy of the rotor is converted into electric energy, Permanent magnet synchronous motor works as a generator.

According to the working principle diagram of three-phase 12/8-pole switched reluctance motor, when the main switches S1 and S2 of phase a winding current control are closed, a is electrically excited, and the magnetic field force generated in the motor is a radial magnetic field with OA as the axis. The magnetic field force line is bent at the air gap between the stator salient pole and the rotor salient pole, The magnetic resistance of the magnetic circuit is greater than that when the salient pole of the stator coincides with the salient pole of the rotor. Therefore, the salient pole of the rotor is pulled by the magnetic field, which makes the polar axis OA of the rotor coincide with the polar axis OA of the stator. Thus, the electromagnetic torque of the magnetoresistance property is generated, which makes the rotor rotate counterclockwise. Turn off the A-phase power supply and establish the B-phase power supply. At this time, the internal magnetic field of the motor rotates 30 degrees, and the rotor continuously rotates 15 degrees counter clockwise under the action of the electromagnetic pull. If the a-b-c-a phase winding is energized in sequence, the rotor will rotate continuously in a counter clockwise direction; When the stator windings in each phase are energized once in turn, the stator magnetic field turns 3 × 30 degrees, the rotor turns one, and the polar distance of the rotor is 3 × 15 degrees (i.e. 360 degrees / rotor salient pole number). If the a-c-b-a phase windings are energized in turn, the rotor will rotate clockwise. Switched reluctance motor has nothing to do with the direction of current, but depends on the sequence of energizing stator phase winding. In the actual operation of multiphase motor, two or more windings are often conducting at the same time. 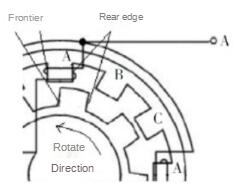 If the windings of SRM are θ 3 and θ 4, then the motor operates as a generator. At this time, the current is formed in the inductor drop region, then dL/dθ＜0, When there is current passing through the phase winding, the braking torque (T) will be generated (T (θ, i) ＜0). If the external mechanical force keeps the motor rotating, the motor absorbs the mechanical energy and converts it into electrical energy for output. At this time, the switched reluctance motor is in the generator working mode.

Switched reluctance motor has the advantages of simple and reliable structure, good starting performance, high efficiency and low cost. It can adjust the speed by changing the turn-on and turn off angle and voltage, and has a wide speed range and ability. The disadvantage of switched reluctance motor is large torque ripple and noise. At present, it is used in some small electric drive vehicles, such as electric drive four-wheel scooter, patrol car, etc.

According to the performance requirements of new energy vehicle drive motor, the drive motor used in the market is different. This paper describes the structure and working principle of AC asynchronous motor, permanent magnet synchronous motor and switched reluctance motor, which are commonly used in new energy drive motor. It will help to better understand the drive motor.
Moreover, due to the different structure and principle of each motor, the application range is also very different. According to the national industrial strategic planning, the research on the electric drive system of environment-friendly new energy vehicles will be more and more extensive, and the motor types and technical level will also be continuously improved.
Source: China Permanent Magnet Manufacturer – www.rizinia.com