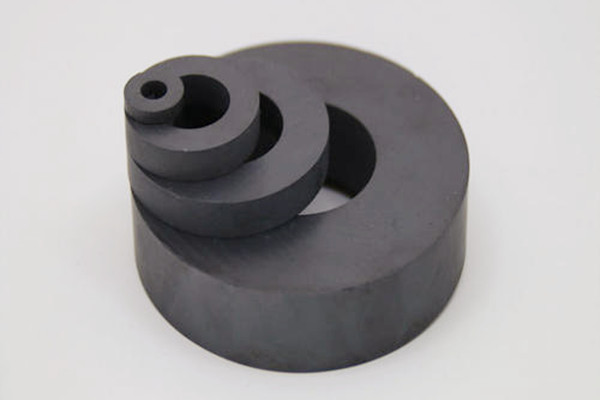 Ferrite cores are equipment used in electromagnetic devices that were previously formed in a specific way. Ferrite is a kind of magnetic material composed of iron oxide, nickel, zinc, and other compounds such as manganese. Ferrite cores are different from other ferrite magnets and other devices because they are composed of soft materials called soft ferrite and ferrite. The soft ferrite used for the magnetic core is ferrimagnetic rather than ferromagnetic, and the magnetic sequence of this material is very different from other materials.
Ferrite cores are generally used in common mode inductors, transformers, circulators, and the core components of antennas in radio frequency applications; they can also be used in transformers and filter devices in power supplies. The low coercivity of this material makes the change of the magnetic core magnetization not cause great energy loss (also called hysteresis loss). However, the material has a high resistance current to suppress stray currents, which will cause power dissipation and reduce efficiency.
Different materials are used in different occasions. The material composed of iron oxide and other compounds can meet the application of different frequency ranges and characteristics through the combination ratio of the optimizer. The application can also be optimized by optimizing the shape of the ferrite core. Antennas in the low-frequency broadcast band are generally rod-shaped magnetic cores, because the combination of coils and ferrites in this physical way can concentrate radio waves. The toroidal core can be better used in high frequency applications, such as RF filtering. The bead core is a special form of ferrite core. Wires can be wound on it or passed through it. It is usually used to suppress power supply noise.
Ferromagnets have a Curie temperature, also known as the Curie point. When the Curie point is reached, the intrinsic magnetic moment of the material will change direction. This spontaneous magnetism makes the typical ferromagnetic application characteristics disappear at the Curie point. The material becomes paramagnetic, and the actual effect is that the ferrite core device loses its isolation characteristics and begins to dissipate more heat. This will cause the components to be destroyed, and the circuit effect will not match the design, because the device no longer operates as expected.

China Ferrite Core Manufacturer www.rizinia.com supplies toroidal ferrite core for scientific experiments or for industrial applications, in kinds of materials such as NdFeB/NIB/neodymium iron boron, etc.
This product is not a toy and is not to be used by children.