Globally, the mainstream international standard for sintered NdFeB is IEC 60404-8-1 designated by the International Electrotechnical Commission (IEC), and the latest version is the 2015 version. The articles on the comparison of NdFeB grade standards at home and abroad are still using the 2005 edition or even the 1998 edition, please pay special attention to the timeliness of the edition). IEC is the first international electrotechnical standardization organization established in the world, and it is also one of the three major global standards organizations (the other two are the International Organization for Standardization ISO and the International Telecommunication Union ITU).
The European Union’s standards for sintered NdFeB are basically the same as the IEC standards. Countries such as the United Kingdom and Germany use the European Union standard EN 60404-8-1:2015, but the standards of each country have some adjustments in the file format and language, such as the United Kingdom The standard is BS EN 60404-8-1:2015, and the German standard is DIN EN60404-8-1:2015.

The United States uses both IEC 60404-8-1:201 and ASTM A1101 – 16. ASTM is the abbreviation of the American Society for Testing and Materials. In addition, the United States also uses the NdFeB standard specified by the MMPA Magnetic Material Production Association and the IEEE Institute of Electrical and Electronics Engineers.

The current national standard for sintered NdFeB in Japan is JIS C 2502 2019 issued by the Japan Institute of Technology and the Japanese Standards Committee. The standard is formulated with reference to the IEC standard, but there are more grades with higher performance than the IEC standard, and some IECs are eliminated. Grades with lower performance in the standard.

Now that we have found the sintered NdFeB standards of our major trading countries, we might as well put them together for comparison. In the figure below, the horizontal axis represents the remanence and the vertical axis represents the intrinsic coercivity. Brand products are placed in the coordinate system one by one. You can find many interesting conclusions by comparing in the figure. 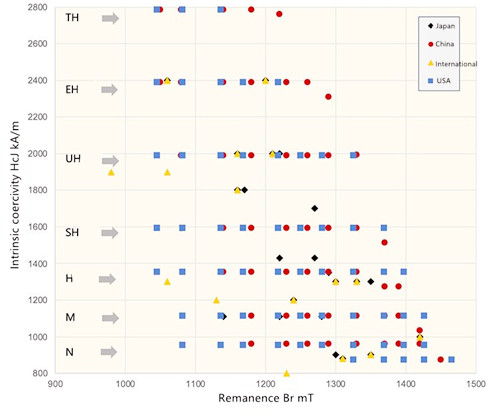