Study on the mechanism of increasing coercivity of (Nd, Dy) – Fe-B magnets

In this paper, two main phases (Nd, The heat treatment process, microstructure and coercivity of TbF3 sintered with Dy) – Fe-B sintered magnets were studied. The optimal primary and secondary heat treatment temperature of TbF3 sintered with Dy) – Fe-B sintered magnets were 900 ℃ and 490 ℃. After the comprehensive optimization of the diffusion process, the coercivity of TbF3 sintered magnets increased from 20.00 kOe to 29.49 The results show that f diffuses into the surface layer of the magnet, while TB diffuses into the geometric center of the magnet; TB is easier to replace nd than dy in the magnetic phase; there is no concentration gradient of TB in the grain boundary phase between the main phase grains, which indicates that the similar capillary suction between the main phase grains is one of the driving forces of TB diffusion. X-ray Diffraction analysis shows that the degree of orientation of the magnet decreases slightly after diffusion. In general, the temperature stability of the magnet is obviously improved by grain boundary diffusion. In the range of 20-150 ℃, the remanence temperature coefficient α of the magnet increases from – 0.107% / ℃ to – 0.093% / ℃, and the coercivity temperature coefficient β increases from – 0.539% / ℃ to – 0.483% / ℃.

The magnets selected in this experiment are prepared by using 5 wt.% Dy (Nd, Dy)-Fe-B magnetic powder and Nd-Fe-B magnetic powder without Dy mixed and utilized dual main phase method with Dy content of 2 wt.% (Nd, Dy)-Fe-B magnets. The original remanence of the magnet is 1.35 kGs, the coercive force is 20.00kOe, and the Square Degree is 98%, among them, the square degree is the ratio of knee-point coercive force Hk (corresponding external magnetic field when the flux is 0.9 times in the demagnetization curve) and internal coercive force Hcj. This magnet is cut into thin sheet with the thickness of 1.9 m, and TbF3 powder with the particle size of 0.7~1.3 μm is coated on the surface of the magnet; In order to find the best heat treatment process, the first-stage heat treatment temperature is set to 880-960 ℃, and the second-stage heat treatment temperature is set to 480-500 ℃.

The microstructure of magnets was observed by Phenom ProX scanning electron microscopy. The electron probe microzone analyzer EPMA-1720 series tested the element distribution of the sample. Pulsed magnetic field meter demagnetization curves of samples at different temperatures before and after diffusion. PANalyti the X’pert Pro x-ray diffraction of c al company to test the diffraction peak of the magnet perpendicular to the c-axis plane before and after diffusion. The flux change of 120 ℃ high temperature impact 2 H diffusion sample was tested by fluxmeter h T-707.

In addition, under the condition that the temperature of the first and second heat treatment is 900 and 490 ℃ respectively, the parameters such as vacuum degree during the heat treatment are optimized. The coercive force of magnets is further improved, and Fig. 2 shows the optimal magnetic properties obtained after diffusion. 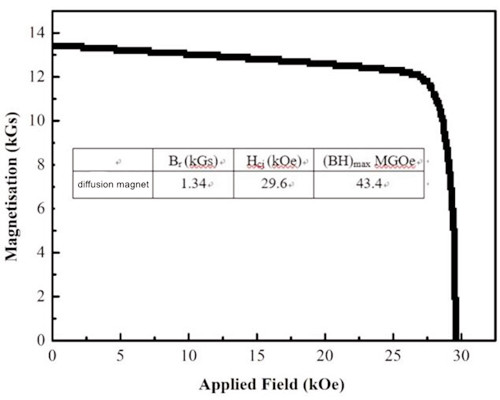 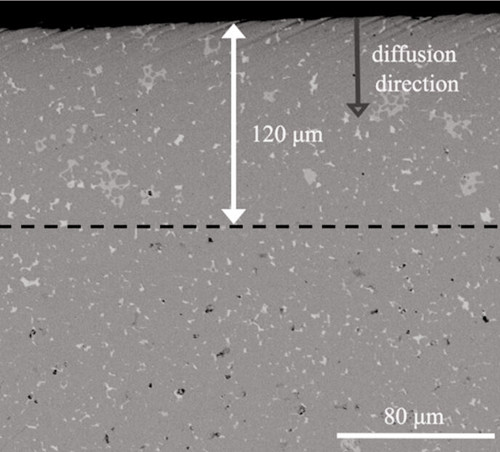 Fig.3 The BSE image of the section with the diffusion magnet
Fig. 4 is the electron probe microzone analysis (EPMA) diagram of the cross section of the diffusion magnet. The Arrow direction is the diffusion direction of terbium element. Figure 4 (a) is the back-scattering diagram of the section of diffuse magnet, in which there is a rare earth rich accumulation area; In the figure, the distribution of Tb element and the rare earth rich phase in the figure is generally the same, forming a network structure; its distribution area is wider than the rare earth-rich phase, indicating that Tb is not only distributed in the rare earth-rich phase, but also distributed on the surface of magnetic particles; the main phase grain surface containing Tb increases the magneto-crystal anisotropy constant of easy-forming nucleus to improve the coercive force of the magnet. The rare earth-rich phase accumulation area circled shows that Tb does not have similar aggregation phenomenon, and the concentration of F and Nd elements is very high, indicating that F diffuses into the crystal boundary phase of the magnet during heating, compounds containing neodymium and fluorine are formed. Combined with Fig. 3, it can be inferred that the diffusion depth of F during diffusion is about 120 μm.
Figure 4 (B) is another area of the diffusion cross section, using white circles to mark the core-shell structure of the main phase grain of neodymium after diffusion; Using black circles to mark the main phase grain of dysprosium, the main phase grain does not form a similar core-shell structure. This indicates that in the process of Tb diffusion, Nd and Dy have preferentially replaced Nd elements in the magnetic phase compared with Tb. 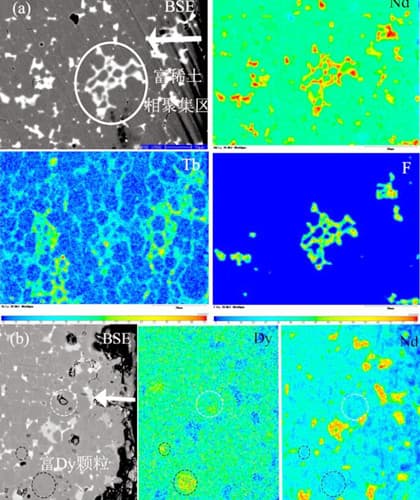 Fig.4 The element distribution of the section with diffusion magnet 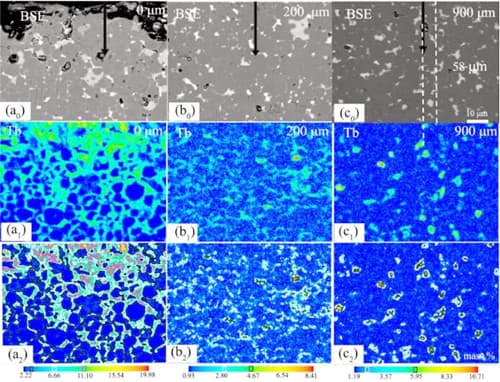 Figure 5 is the distribution diagram of back scattering (a0,b0,c0) and Tb (a1,b1,c1) from the depth of diffusion source to 0-58μm, 200-258μm and 900-958μm. And draw a regional graph (a2,b2,c2) with the “stroke” tool in photoshop to draw the boundaries of Tb with different contents; In the area with a diffusion depth of 0-58 m, pink, white, the Tb content of the black marked area is 11.10, 6.66 and wt 3.33.%; It was found that the sides of the black and white labels were very close. In the area with a depth of 200-255 μm from the diffusion source, the Tb content is also marked with black and white, which is close to 5 and 3wt.% Of the area, Tb content is 5wt.% Of the areas show small area enrichment, with a concentration of 3wt. The area of%, covering almost all the areas at the boundary boundary of the thin layer; In the scanning area with a depth of 900-958μm from the diffusion source, the content of massive rare earth-rich Tb in the scanning area also reaches 6wt.%; The depth of the geometric center of this magnet is 950μm, which is Tb diffused to the geometric center of the magnet. The diffusion depth of terbium is 950 μm much larger than that of element F is 120 μm, which indicates that Tb and F diffuse into the magnet during the diffusion process, F combines with Nd and micro element Al in the phase of grain boundary to displace the more active Tb element; Its equation is: 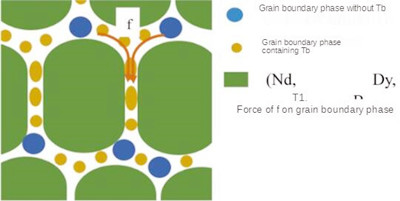 Fig.6 Structure diagram of RE-rich phase containing terbium diffusing into the gap between the main phase grains under the action of driving force
Fig.7 is the X-ray diffraction pattern perpendicular to the c axis plane before and after magnet diffusion. Diffraction peaks of sintered (Nd)-Fe-B magnets (105) and (006) twin planes at 2θ of 36.4 and 43.2, respectively, I(006)/I(105) represents the degree of orientation of the magnet, the ratio of the two peaks of the original magnet is 1.33, and the ratio is reduced to 1.3 after diffusion. From the element analysis, in the process of grain boundary diffusion, Tb replaces Nd to enter the main phase, the lattice parameter of Nd 2Fe14B is a = 0.880μm c = 1.22μm Tb 2Fe14B. The lattice parameter is a = μm c = 1.205 μm; the reduction of the lattice parameter c may make the c axis of the main phase grain offset the orientation direction, resulting in a slightly lower degree of orientation of the magnet. 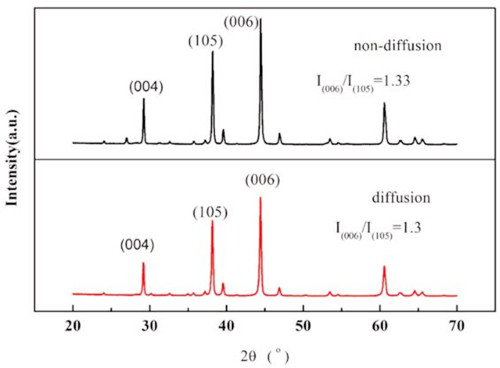 Fig.7 The XRD curves of non-diffusion and diffusion samples

In the formula, αbr and ∆hcj represent the temperature coefficients of residual magnetism and coercive force in the T0-T temperature range. Br(T0) and B(T) they are respectively T0 and T, which are the corresponding residual magnetic of the two temperature points; Hcj(T0) and Hcj(T) are the coercive force of the corresponding points. According to the calculation of this formula, we find that αbr and ∆hcj are negative; The larger they are, the smaller the absolute value is and the better the temperature stability of the corresponding magnet is. Figure 8(a) and 8 (B) are the demagnetization curves of the original magnet and the magnet after diffusion at different temperatures. According to the formula, the original magnet is between 20-150 ℃, Α is-0.107%/℃,β is-0.539%/℃. After diffusion magnet, between 20-150 ℃, α is-0.093%/℃,β is-0.483%/℃. This indicates that grain boundary diffusion obviously improves the stability of the magnet. 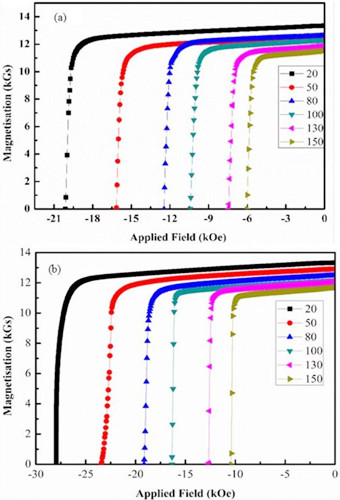 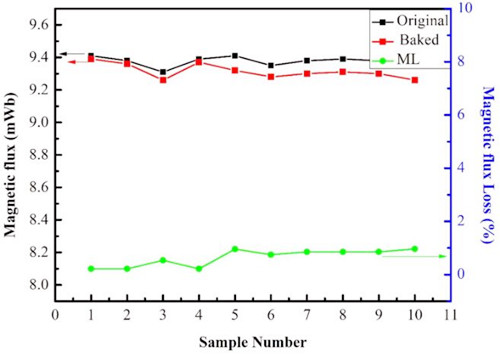 Fig. 9 The magnetic flux change of diffusion magnet before and after high temperature impact