Permanent magnet synchronous motor (PMSM) is a kind of motor with the largest carrying capacity of electric vehicles in China. Its increasing success is mainly due to the low cost of electronic control speed regulation and the significantly dominant power density brought by its simple structure. 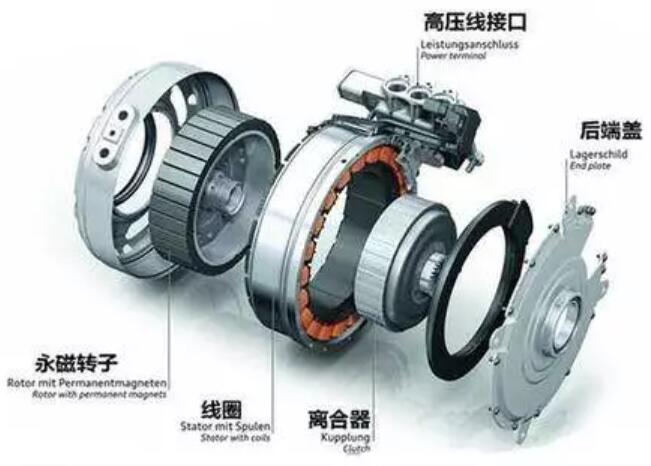 The stator of permanent magnet synchronous motor is the same as that of asynchronous motor. The three-phase windings are evenly arranged with an angle of 120 ° apart.
The characteristic parameters of the stator include the number of winding phases (generally single-phase, three-phase and multi-phase) and the number of winding slots.
The definition of winding slot number is half of stator slot number divided by the product of stator phase number and rotor pole number. According to the number of windings contained in each stator slot, the permanent magnet motor can be divided into integral slot winding and fractional slot winding.
Fractional slot winding means that windings belonging to different phases may be placed in the same stator slot. Compared with integral slot winding, fractional slot winding has the advantages of higher insulation requirements.
The number of slots to be excavated on the stator core is reduced, which saves space for the winding, and simplifies the processing process; each slot contains multiple poles, which reduces the impact vibration generated by the excessive part between slots in the working process, and improves the excitation waveform. 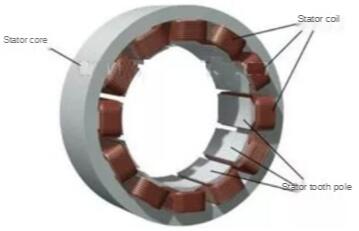 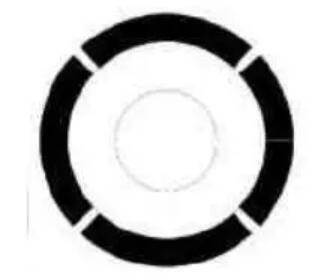 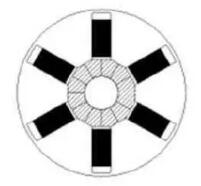 Claw pole rotor, two exactly the same claw flange, caught together, fixed in the middle of a certain number of permanent magnets. In this way, one flange is N-pole and the other is S-pole. The claw on the flange plate acts as a pole shoe. 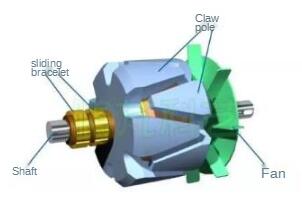 In addition to the different arrangement, the magnetic field generated by the surface type and the built-in type are also very different. In the process of output power of built-in rotor, the torque includes not only the electromagnetic torque component, but also the reluctance torque component. So the permanent magnet synchronous motor with built-in rotor has obvious advantages in power density.

When there is a system load at the rotor shaft end, the system needs the motor to pull the rotor to rotate by the force of the stator magnetic field, so that the electric energy in the system can do work and convert into mechanical energy. The rotor and stator are in the relative position shown in the figure below.

At the moment shown in the figure, a pair of magnetic poles on the stator magnetic field rotate to the reader’s left hand side. The rotor is pulled by the electromagnetic force of the stator and moves to the left. The stator is in the front and the rotor is in the back.
In this way, an angle is formed between the motion direction of the rotor and the action line of the electromagnetic force between the stator and the rotor, which is called the moment angle.
The torque angle is between 0 ° and 90 ° and the motor is in the motor working mode.

When the rotor is pulled by the external mechanical force, it is in the rotating state, and the stator circuit is unobstructed, but it is not connected to the power supply.
When the rotor rotates, a rotating magnetic field is formed, which makes the static stator coil passively cut the magnetic line of force and generate the induced current. At this time, the stator and rotor are in the relative position as shown in the figure below.

At the moment shown in the figure, a pair of magnetic poles on the permanent magnet rotor move to the reader’s left hand side. The induction current produced by the stator and the electromagnetic force produced by the rotor. The direction of the action line of the electro magnetic force forms an angle with the motion direction of the rotor, that is, the moment angle.
The torque angle is between 90 ° and 180 ° and the motor is in generator working mode.

A constant frequency sinusoidal current is applied to the stator. Under the action of the rotating magnetic field, the rotor rotates synchronously with the magnetic field. The rotor has no effect of any load torque. The rotor and stator are in the relative position in the figure below.

The stator magnetic field moves to the left-hand side of the reader and the rotor moves synchronously. The action line of the force between the stator and the rotor forms a 90 ° angle with the motion direction of the rotor.
At this time, the power provided by the power supply can only overcome the friction resistance moment of the system, and only has the function of excitation. When the active power provided by the motor is 0, the motor is called “reactive power compensator”, that is, the motor that only generates reactive power.

When the excitation frequency of the stator is constant, the output torque of the motor is not related to the speed. When the load torque fluctuates, the motor speed will not be affected. This ensures the high quality stability of the transmission system. 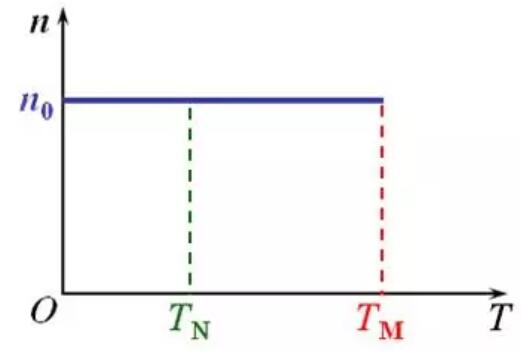 Compared with asynchronous motor, the relationship among electricity, magnetism and force of permanent magnet synchronous motor is simpler. After a certain coordinate transformation, the decoupling of current and torque can be realized.

Field orientation, that is, in the d-q coordinate system, the part of the motor parameters, such as the excitation current, which affects the torque, is the component of the parameters projected to the q axis. The part projected on the d-axis does not need to be considered, which is commonly known as the id = 0 method. In this method, the decisive factor of the maximum output speed of the motor is the maximum supply voltage of the controller.
The limitation of the field oriented control strategy is that it can’t reflect part of the parameter changes of the field affected by the excitation current, so the field weakening control can’t be carried out.

The starting point of direct torque method is to control the parameters in the torque formula to directly affect the torque output value. Select the moment angle as the control object.
Taking the built-in rotor permanent magnet synchronous motor as an example, the specific method is illustrated.
When the power supply voltage and the frequency of the stator magnetic field are constant, the real-time output torque of the motor is proportional to the sine value of the torque angle.
The electromagnetic torque value corresponding to each torque angle can be calculated offline to form a vector table, which is stored in the upper computer. During the operation of the motor controller, the torque and torque angle are observed in real time, and the original values in the table are extracted for comparison. If it is found that the value is different from that in the table, adjust the power supply voltage value and correct the torque.
The direct torque method has good robustness, simple algorithm, and does not need coordinate transformation, so it is widely used in the early stage. However, the control accuracy of this method drops sharply at low speed. Therefore, it can be used only below the fundamental frequency.

NEXT： What is the magnetic relation between the magnetizing energy and magnetic force of magnetic steel?