Permanent magnet synchronous motor has high power density, fast response speed and other excellent characteristics, widely used by all walks of life. In the field of electric vehicle drive motors, domestic mainstream manufacturers basically use permanent magnet synchronous motors. Because the magnetic stability of NdFeB magnet is affected by temperature and reverse magnetic field, there is a risk of demagnetization under the high speed operation or high torque requirement of electric vehicles, which directly affects the use of electric vehicles, so motor and magnetic material practitioners have been committed to the research and improvement design of anti-demagnetization risk of permanent magnet synchronous motor. In this paper, based on an abnormal demagnetization phenomenon during the testing of a sample motor, we analyze the causes through theory and simulation, and find the relevant influencing factors that trigger demagnetization.

1. Background of the problem

The basic parameters of an electric vehicle motor are shown in Table 1.1 below. After the NEDC cycle calibration test, a 6.5% decay in the amplitude of the counter-electromotive force was observed in the cold state retest, and the motor rotor was presumed to be demagnetized. After the motor anatomy measurement of the rotor surface magnetic waveform and value, it was found that the middle two sections of the surface magnetic amplitude decreased by 26%, the two sections immediately adjacent to the middle section decreased by 14%, and further out is 6%, the outermost two sections basically did not decrease, each section of the surface magnetic curve waveform is basically the same, only the value decreased, other phenomena rotor core and shaft surface no black, blue phenomenon, stator retest insulation and high voltage resistance normal. 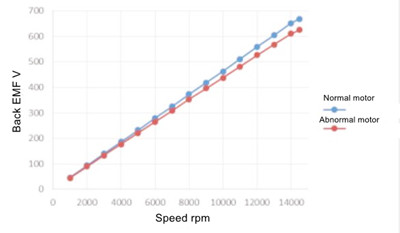 In the formula: IL is the loss rate, αBr is the temperature coefficient, all take absolute values. 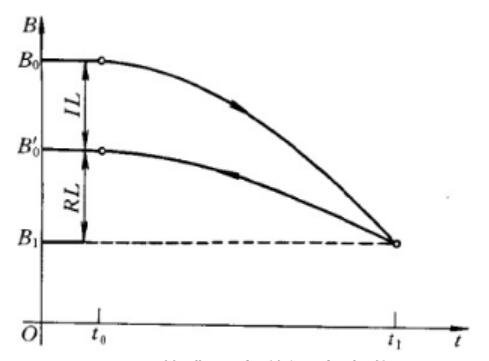 Figure.3 Magnetic susceptibility strength with temperature
Generally this magnetic loss due to high temperature in the rotor is gradually deteriorated to the whole magnet by demagnetization starting from the outer edge of the magnet. In actual motors, the heat source of the rotor comes from two main sources: first, the eddy current loss heat generation in the electrical steel and magnets; second, the high temperature stator heat transfer in the confined space [2]. Synchronous motor rotor speed is consistent with the speed of the fundamental armature magnetic field, there will be no eddy current and hysteresis losses generated, but inconsistency with the harmonic magnetic field electrical frequency will generate induced eddy currents. Especially at high speed weak magnetism more high amplitude harmonic field will be involved in the induction thus increasing the rotor losses and generating temperature rise. The stator temperature rises fastest under the action of copper and iron losses, and generates a temperature difference of several tens of degrees inside the motor to produce heat transfer, which also brings rotor temperature rise.
In this paper, the motor uses magnet grade N45UH, withstanding temperature of 180℃, considering that the finished magnet withstanding temperature is generally lower than the material by about 3%, its withstanding temperature still reaches about 174.6℃. The motor is tested with a temperature sensor buried in the stator winding, and the control level is limited to 140°C, i.e., the software reads 140°C when the motor decelerates and reduces torque to limit further temperature rise. Table 2.1 shows the test of the temperature of each part of the outer surface of the motor with an infrared temperature measuring gun. From the data in the table can be speculated: the test process in the stator temperature limit, the rotor core did not occur under the short circuit, partial discharge flashover and other faults, the rotor local temperature to be higher than the stator more than 40 ℃ is basically impossible, so it is presumed that this test does not exist pure high temperature
Demagnetization. The temperature difference between the middle section and the two ends of the rotor is found in the temperature field simulation (Figure.4), and the temperature difference is 3-10℃ under the full working condition, which means that there is a local temperature increase inside the rotor core and the temperature concentration forms a heat island effect, and this phenomenon may be the enhancer of the abnormal demagnetization. 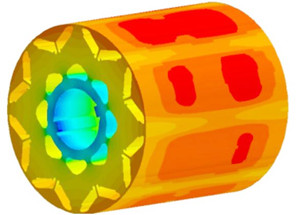 Weak magnetic control and MTPV control strategies are used to increase the speed and maintain high power during the constant power operation phase of the motor, introducing a higher percentage of straight axis current, when the external reverse magnetic field generated by the stator is stronger. This current modulation process can lead to uniform or regional non-uniform demagnetization of the permanent magnets if there is a momentary increase in the reverse magnetic field due to current imbalance or response changes. In addition, the motor calibration offset estimates the rotor position offset value, by giving the d-axis current to make the motor torque is 0, at this time the armature magnetic field and the rotor middle section position alignment, according to Figure.2 structure rotor V-type diagonal pole in the middle and the two ends of the pole offset, so the two ends can still sense the torque offset, can be understood as the same current in different rotor sections corresponding to different dq axis angle, in order to balance this relationship, the The d-axis current in the middle section is relatively larger than the two ends, and the effect of this phenomenon in normal motor operation is weak.

Based on JMAG electromagnetic simulation software, the calculation and analysis are carried out under the three-dimensional electromagnetic field model, and the model is shown in Figure.5. To speed up the calculation, a 1/8 local model is used, and the magnet is divided into four segments with V-shaped oblique pole structure and rotated 0.95° between two segments. The initial position of the rotor is aligned to the centerline of the stator A-phase winding with the pole centerline of the middle section of the rotor. The simulation is performed by inputting current and temperature variations to see the state of the magnet density cloud map distribution. The input current and temperature values are predicted values and not actual values, and are intended to illustrate the problematic phenomenon. 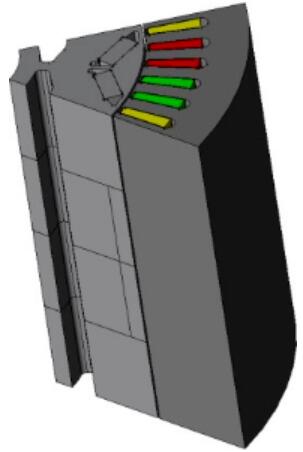 Firstly, we verify the rotor magnet demagnetization distribution characteristics of the motor under excitation in normal state, and the input and output values are shown in Table 3.1 and Table 3.2.
Table 3.1 Motor input parameters 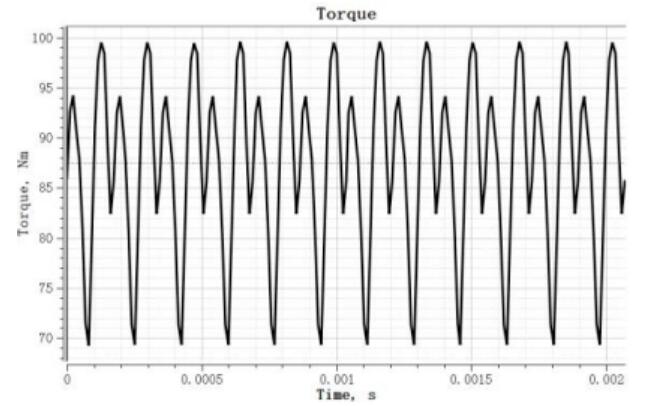 Based on the simulation in 3.1, a short-time (0.00001s) surge straight-axis current is added to the motor excitation source with a current amplitude of 400∠90°A, keeping the temperature of each magnet consistent. 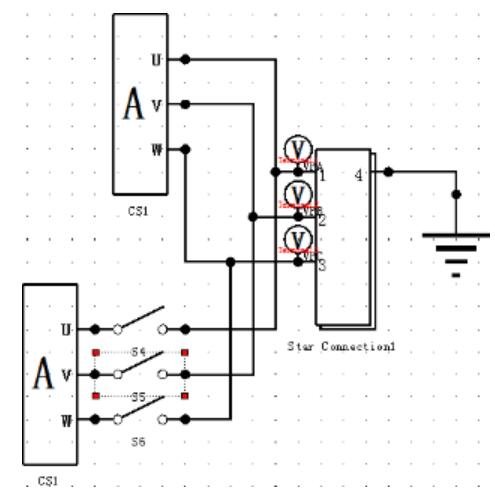 From 1e-5s after introducing demagnetizing current to maintain 1e-5s, the whole motor torque first increases abruptly and then decreases by 12Nm and maintains the decreased torque level, and irreversible demagnetization occurs. The values of iron loss in each section of the rotor are high at both ends and low in the middle, indicating that the induced eddy currents increase at both ends, i.e. the magnetic field strength is stronger at both ends than in the middle section. The magnetic density diagram shows that the magnet stage demagnetization phenomenon is obvious, but the maximum demagnetization phenomenon in the middle is not reflected, which is related to the non-stage distribution of magnet temperature. 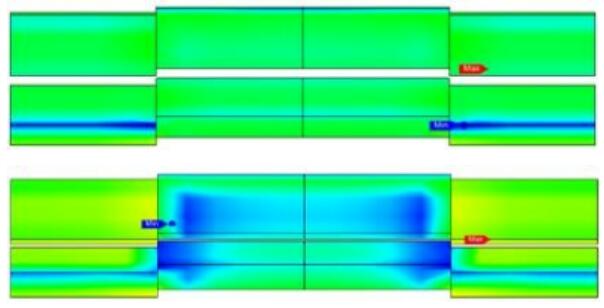 On the basis of 3.2 simulation, the temperature of four sections of magnets is changed to step temperature to make the rotor temperature distribution close to the actual state.

The torque also decreases by 7Nm compared with the normal operating condition. Since the magnet temperature in section 3.2 simulation is 140℃, the former demagnetization effect is stronger leading to a more obvious torque decrease. Figure.10 shows that the iron loss in the middle section of the rotor is significantly reduced compared to the two ends. The magnetic density distribution on the magnet surface is shown in Figure.10. 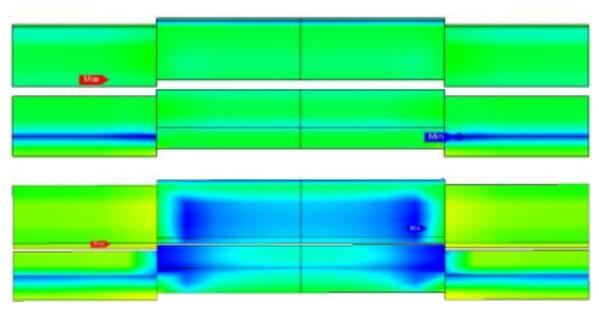 For this demagnetization failure, the simulation analysis shows that the probability of occurring under the dual action of current and high temperature is higher, and the design is improved from the following angles and verified by a new round of tests.

For the second measure, the following adjustments were made on the control side: adjusting the current input from Id/Iq input to Is/thet input; enhancing the deadband compensation and injecting zero-sequence current; and changing from two-phase sampling to three-phase sampling to keep the current within 2% of the three-phase imbalance. After the above improvement measures, the new motor was recalibrated and the external characteristic torque values were consistent with the design requirements, and no new demagnetization occurred.

demagnetization
Share:
PREV： Analysis on the causes of motor energy consumption and Its Solutions
NEXT： Introduction to four manufacturing processes of bonded Nd-Fe-B