In the last issue, Actility briefly introduced the background and purpose of NdFeB Dysprosium and Terbium Infiltration technology, and learned that there are three mainstream preparation processes for NdFeB grain boundary diffusion technology: evaporation diffusion, magnetism controlled sputtering and surface coating. In this issue, we will learn more about the technology of permeating dysprosium and terbium through magnetron sputtering.

Method and principle of magnetron sputtering

Magnetron sputtering is actually a method of coating, which belongs to a kind of physical vapor deposition. It has the advantages of simple equipment, easy control, large coating area and strong adhesion. Magnetron sputtering requires the use of special equipment. The substrate (the object to be coated) and the target (the coating material, such as copper, aluminum, etc.) are placed in the equipment, and argon is injected to start the sputtering reaction after vacuuming.

The sputtering process is shown in the figure below. The target material generates glow discharge in an inert gas (such as Ar) under the action of DC negative high voltage or radio frequency voltage, and the ionized argon ions are accelerated to the substrate under the action of the electric field. It collides with Ar (argon) atoms again, ionizing more Ar ions and electrons. Ar ions accelerate the bombardment of the target under the action of an electric field, and the atoms on the surface of the target escape from the original crystal lattice, transfer and deposit on the surface of the substrate to form a film. 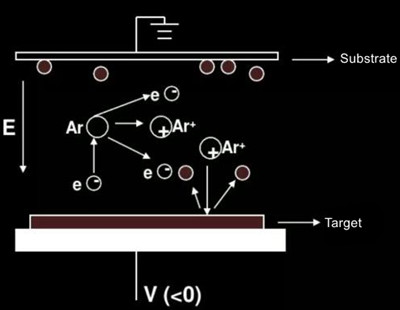 If the target is placed in a magnetic field, the electrons will be affected by the Loren magnetic force of the magnetic field during the process of accelerating and flying to the substrate, and will be trapped in the plasma region near the target surface, and perform circular work around the target surface under the action of the magnetic field. The movement path of electrons is lengthened, so that the probability of collision with Ar atoms is increased, and more Ar ions and electrons are generated, which can improve the efficiency of sputtering. At the same time, electrons can get rid of the bondage of magnetic force only when their energy is about to be exhausted, and deposit on the substrate away from the target material, so that the substrate heating rate will be greatly slowed down.
Magnetron sputtering has the characteristics of high speed, low temperature, low damage and good stability. Factors such as magnetic field distribution, sputtering rate, air pressure, voltage, target base distance, etc. will affect the sputtering effect. According to the different current forms, magnetron sputtering can be divided into radio frequency sputtering, DC sputtering and intermediate frequency sputtering. (RF sputtering is currently not suitable for industrial production)

After understanding the basic methods and principles of magnetron sputtering, everyone must have a basic understanding of magnetron sputtering dysprosium and terbium infiltration of sintered NdFeB. Using the DC magnetron sputtering method, the sintered neodymium iron boron is used as the substrate and the dysprosium or terbium metal (purity>99.9%) is used as the target. After argon is injected into the magnetron sputtering equipment, the electrons collide with the argon atoms. Generates argon ions and new electrons. The argon ions accelerate the bombardment of the target under the action of an electric field. The dysprosium or terbium atoms on the surface of the target escape from the original lattice and escape, transfer and deposit on the surface of NdFeB (Sintered NdFeB is in progress Before magnetron sputtering, pickling and ultrasonic washing are required). This is the first step of magnetron sputtering with dysprosium and terbium. After the target is formed into a coating, the sample needs to be placed in a vacuum sintering furnace for diffusion tempering treatment, which is the second step. The dysprosium/terbium on the magnet surface diffuses with high temperature and enters the magnet through the liquid Nd-rich phase. On the one hand, Dy/Tb can improve the mutual wettability between Nd2Fe14B phases and optimize the microstructure and composition distribution of the Nd-rich phase. On the other hand, Dy has a large magnetocrystalline anisotropy field, which can be significant after entering the magnet Improve the coercivity of the magnet.

Magnetron sputtering , Permanent Magnet Manufacturer
Share:
PREV： What is Neodymium Iron Boronizing Dysprosium Terbium Infiltration Technology
NEXT： How to calculate the surface magnetism of a magnet?