What is a magnetic separator?

Magnetic separator is one of the most widely used and versatile machines in the industry, which uses the magnetic difference between minerals for separation, improves ore grade, purifies solid and liquid materials, and recycles wastes.
Magnetic separators are widely used in mining, timber, kiln, chemistry, food and other industries. For mining industry, the magnetic separator is suitable for wet or dry magnetic separation of manganese ore, magnetite, pyrrhotite, roasted ore, ilmenite, hematite limonite and other materials with particle size less than 50 mm. It is also used for iron removal and waste treatment of coal, non-metallic ore, building materials and other materials.

The magnetic separator (taking the wet permanent magnetic drum separator as an example) is mainly composed of cylinder, roller, brush roller, magnetic system, tank body and transmission part. The cylinder is welded by 2-3mm stainless steel plate, and the end cover is cast aluminum or workpiece, which is connected with the cylinder by stainless steel screws. The motor drives the cylinder, magnetic roller and brush roller to rotate through the reducer or the stepless speed regulating motor. 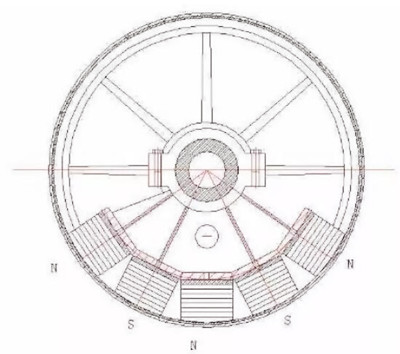