What is a coupling?

Coupling is an important part of mechanical transmission, which transmits torque through the mutual coupling of the driving shaft and the driven shaft. The following figure shows several common coupling forms, which can help everyone better understand what is a coupling.

The traditional coupling is a contact type, the structure is relatively complicated, and it will wear out during daily operation. If the operation overload occurs, it will cause serious wear to other mechanical parts, which is very detrimental to the stability of the mechanical operation equipment of. If the driving shaft and the driven shaft of the coupling need to work in two different media that are isolated from each other, a sealing element must be used for dynamic sealing, so that there is either an increase in rotation resistance to ensure a reliable seal, or a tight seal There is a leakage problem. In addition, with the wear and aging of the sealing elements, leakage will be aggravated, especially in systems where harmful gases (hazardous liquids) exist. Once leaked, it will pollute the environment and endanger lives.
Magnetic coupling is a non-contact coupling, which is generally composed of two magnets, and an isolation cover is set in the middle to separate the two magnets. The inner magnet and the transmission part are connected to each other, and the outer magnet and the power part are effectively connected. The magnetic field NS poles are coupled and interact to transmit power. The magnetic coupling has the function of buffering and absorbing vibration. In addition, it adopts a new principle of magnetic coupling to realize the transmission of force and torque between the driving shaft and the driven shaft without direct contact, and the dynamic seal can be turned into a static seal. , Achieve zero leakage. Therefore, it is widely used in occasions with special requirements for leakage.

Structure: Install magnets on two disks of the same diameter in a way that NS poles cross. When in use, the two discs are respectively installed on the driving shaft and the driven shaft, leaving a certain air gap in between.
Principle: Since the N pole of the A magnet attracts the S pole of the opposite B magnet, while repelling the N poles on both sides of the B magnet, it is ensured that the driven shaft and the driving shaft keep synchronous rotation within a certain torque range. 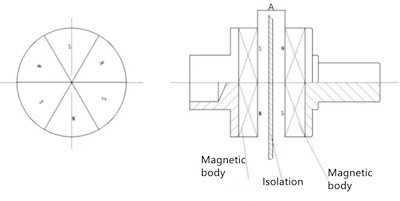 Torque: This planar actuator has a simple structure and does not require high coaxiality of the two shafts during installation. Since the principle of plane attraction is adopted, the smaller the air gap, the greater the torque. In addition, since the transmitted torque is proportional to the area of the disc, the torque of this magnetic coupling cannot be too large, otherwise it will cause oversize and difficult installation.

The coaxial magnetic coupling is currently the most widely used synchronous drive, and a typical application is a magnetic pump.
Structure: The coaxial magnetic coupling is composed of an outer rotor, an inner rotor, a spacer sleeve and a bearing system. The outer circumference of the inner rotor and the inner circumference of the outer rotor are equipped with magnets. The magnets are even-numbered poles, and the circumference is in the NS cross mode. arrangement. Align the working surfaces of the magnets of the inner and outer rotors, that is, automatic coupling. Isolation sleeve and bearing system are mainly used in the structure of magnetic transmission seal. 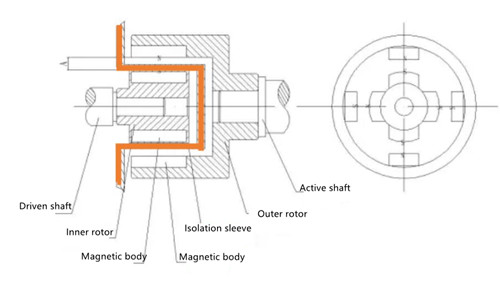 Air gap and isolation: There is a certain air gap between the inner and outer rotors to isolate the driving and driven parts. The air gap is mostly between 2mm-8mm. The smaller the air gap, the higher the effective utilization of the magnet, but the more difficult the isolation; the larger the air gap, the more convenient the isolation, but the worse the effective utilization of the magnet’s magnetic field. The radius position where the air gap is located is the working radius of this magnetic coupling. The torque of the required actuator can be obtained by adjusting the size of the air gap radius during design.
When the load exceeds the maximum torque, the actuator starts to “slip”, that is, the magnet jumps to the next coupling state from the current coupling state and the circular displacement. During this slipping process, the magnetic field in the air gap changes rapidly, and the magnets of the inner and outer rotors are simultaneously charged and demagnetized by each other, generating heat. The temperature can quickly rise to above 100 degrees Celsius in a short time, which will cause the magnet to demagnetize and the actuator to be scrapped. Therefore, although this type of actuator can play the role of overload protection, it is generally not used as an overload protection device. 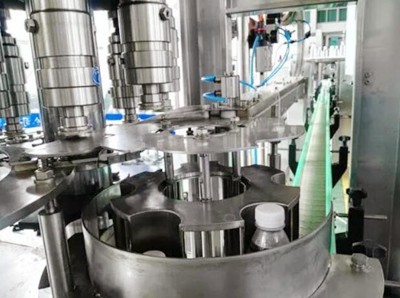 Hysteresis transmission is a method of transmission using the principle of hysteresis. Common hysteresis actuators are generally coaxial structures similar to synchronous actuators. The difference is that the inner and outer rotors use different magnetic materials. Generally speaking, the inner rotor (active shaft) uses materials with high coercivity and high remanence, such as neodymium iron boron. The outer rotor (driven shaft) adopts low-coercivity magnetic materials, such as AlNiCo. The magnets on the driving shaft are arranged in a crossed arrangement of NS poles. When the load is not greater than the rated torque, the driven shaft rotates synchronously with the driving shaft; when the load exceeds the rated value, the inner and outer rotors slip, and only the rated torque is transmitted to the driven shaft. The excess energy is released thermally in the process of charging and demagnetizing the inner magnet and the outer magnet.
This kind of hysteresis transmission structure is commonly used in magnetic capping devices, which can ensure that the bottle cap gets enough tightening force without damaging the bottle cap.