How does the anti-interference magnetic ring work

What is anti-interference magnetic ring?

Anti interference magnetic ring is also called EMI absorbing magnetic ring. EMI interference suppression on multi strand magnetic beads cable includes noise and peak interference on power line. It also has the ability to absorb EMI absorbing magnetic ring to collect electrostatic pulse, so that electronic equipment can meet the corresponding international standards of electromagnetic compatibility (emi/emc) and electrostatic discharge. When used, a multi-core cable or a bunch of multi strand cables can be penetrated into it. One more wear can enhance the effect. The absorption characteristics of the magnetic beads in the ring are usually measured by the impedance of 25MHz and.

The principle and function of anti-interference magnetic ring

The motherboard, CPU, power supply and IDE data line in the computer cabinet are all working in high frequency state, so there are a large number of spatial stray electromagnetic interference signals in the chassis, and the signal strength is several times to dozens times outside the chassis! USB cable without magnetic ring does not take shielding measures in this space, so these USB cables become a good antenna, receiving various chaotic high-frequency signals in the surrounding environment, and these signals are superimposed on the original transmitted signals, even change the useful signals transmitted, which will easily cause problems.
In order to improve the transmission rate and stability, and to reduce the interference of transmission line to other equipment, such as sound card, the electrostatic shielding layer is designed. The shielding layer is made of a thin foil or a mesh of several fine copper wires. The principle of surface effect of electrostatic field is applied. That is to say, the outer surface of the data transmission line is coated with a metal film, and the shielding layer is grounded with the chassis, so that the data line can be isolated from the spatial interference signal well!
The absorbing magnetic ring, also known as ferrite magnetic ring, is commonly used in detachable magnetic ring in separation. It is a common anti-interference element in electronic circuit, which has a good inhibition effect on high-frequency noise. Generally, it is made of ferrite material (Mn Zn). The magnetic ring has different impedance characteristics at different frequencies, and the impedance is very small at low frequency. When the signal frequency increases, the impedance of the magnetic ring increases sharply. It can make the normal and useful signals pass well, and can suppress the high frequency interference signal well, and the cost is low.

Ferrite anti-interference core is a new kind of inexpensive and material interference suppression device developed in recent years. It is equivalent to low-pass filter, which solves the problem of high frequency interference suppression of power line, signal line and connector, and has a series of advantages such as simple use, convenience, efficiency and small space occupied. It uses ferrite anti-interference magnetic core to suppress electromagnetic interference (e Mi) is an economical and effective method, and has been widely used in various military or civil electronic equipment such as computer.
Ferrite is a kind of metal which is made of high conductivity magnetic material infiltrating other magnesium, zinc, nickel and other metals at 2000 ℃. In the low frequency, the ferrite anti-interference magnetic core presents very low inductive impedance value, which does not affect the transmission of useful signals on the data line or signal line. In the high frequency section, the impedance increases from 10MHz to the high frequency, and the inductance component remains very small, but the resistance component increases rapidly. When high-frequency energy passes through the magnetic material, the resistance component will convert the energy into heat energy dissipation. In this way, a low-pass filter is constructed, which makes the high-frequency noise signal attenuate greatly, and the impedance of the useful low-frequency signal can be ignored, which does not affect the normal operation of the circuit.
EMI absorption ring / bead is a kind of element made of ferrite and an absorption loss type element. The characteristics of the method are as follows: absorbing high frequency signal and converting the absorbed energy into thermal energy dissipation, thus to suppress the transmission of high frequency interference signal along the conductor. The resistance component in the equivalent impedance is the function of frequency, which varies with frequency.
The effective band of EMI absorption ring / bead is 2 1000MHz, and the best performance band is 5200mhz, and the absorption impedance in this frequency band is maintained as a constant.
Attention should be paid to the selection of EMI absorption ring / bead: through the current size proportional to the component volume, the two imbalance, easy to cause saturation, reduce the performance of the components, and avoid saturation is to pass two wires (positive, negative or fire, ground) of the power supply through one magnetic ring at the same time. Another good method in using the magnetic ring is to make the wires through the ring repeatedly string several times, which can increase the area of the ring and increase the equivalent absorption length. Secondly, the magnetic ring has hysteresis characteristics and the low-end characteristics can be improved. Its manufacturing process and mechanical properties are similar to that of ceramics. The electromagnetic properties of the system are related to the addition of metal components, the time and temperature of sintering process and the gas composition. For the split mounted magnetic ring, the magnetic ring with smaller inner diameter and longer length shall be selected as far as possible. Meanwhile, the magnetic ring must tightly wrap the cable, that is, the inner diameter of the magnetic ring shall be closely matched with the outer diameter of the cable.

Why set up anti-interference magnetic ring?

The motherboard, CPU, power supply and IDE data line in the computer cabinet are all working in high frequency state, so there are a large number of spatial stray electromagnetic interference signals in the chassis, and the signal strength is several times to dozens times outside the chassis! The absorbing magnetic ring, also known as ferrite magnetic ring, is commonly used in detachable magnetic ring. It is a common anti-interference element in electronic circuit, which has a good inhibition effect on high-frequency noise. Generally, it is made of ferrite material (Mn-Zn).
The magnetic ring has different impedance characteristics at different frequencies, and the impedance is very small at low frequency. When the signal frequency increases, the impedance of the magnetic ring increases sharply. It can make the normal and useful signals pass well, and can suppress the high frequency interference signal well, and the cost is low. Ferrite is a kind of ferromagnetic material with cubic lattice structure. Ferrite material is ferromagnesium alloy or ferronickel alloy. Its manufacturing process and mechanical properties are similar to ceramics, and its color is gray black. Ferrite is one of the most popular cores in EMI filters. Many manufacturers provide ferrite materials for EMI suppression.
The material is characterized by high frequency loss and high permeability. It can be the minimum capacitance between the coil windings of inductors under the condition of high frequency and high resistance. For ferrite used to suppress electromagnetic interference, the most important performance parameters are permeability μ and saturated flux density BS. The permeability μ can be expressed as the complex number, the real part constitutes the inductance, the imaginary part represents the loss, and increases with the increase of frequency. Therefore, its equivalent circuit is a series circuit composed of inductance L and resistance R, and l and R are functions of frequency. When the conductor passes through the ferrite core, the inductance impedance of the conductor increases with the increase of frequency, but its mechanism is completely different at different frequencies. 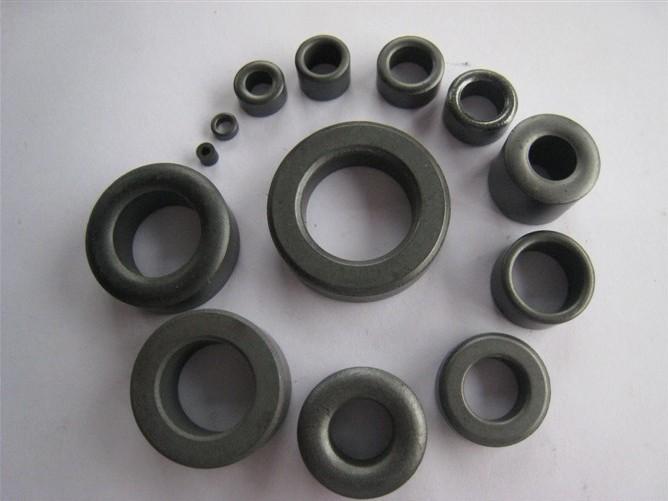 Different ferrite suppression elements have different optimal suppression frequency range. Generally, the higher the permeability, the lower the suppression frequency. In addition, the larger the volume of ferrite, the better the inhibition effect. The smaller the inner diameter is, the better the inhibition effect is. However, in the case of DC or AC bias current, there is also the problem of ferrite saturation. The larger the cross section of the suppression element is, the less saturated it is, and the greater the bias current it can withstand.
When EMI absorbing magnetic ring / bead is used to suppress the differential mode interference, the current value through it is proportional to its volume, and the two maladjustments result in saturation, which reduces the performance of the component; when EMI absorbing magnetic ring / bead is used to suppress the common mode interference, two lines (positive and negative) of the power supply are passed through a magnetic ring at the same time, and the effective signal is the differential mode signal. EMI absorbing magnetic ring / bead has no effect on it, but it will show a greater influence on the common mode signal Inductance. Another better way to use the magnetic ring is to let the wire through the magnetic ring wind several times to increase the inductance. It can be used reasonably according to its suppression principle of electromagnetic interference.
Ferrite suppression elements should be installed close to interference sources. For the input / output circuit, it should be close to the inlet and outlet of the shielding shell as far as possible. For the absorption filter composed of ferrite magnetic ring and magnetic bead, not only the high permeability lossy material should be selected, but also its application should be paid attention to. Their resistance to high-frequency components in the circuit is about ten to several hundred Ω, so their role in high impedance circuits is not obvious. On the contrary, they will be very effective in low impedance circuits (such as power distribution, power supply or RF circuits).

How do magnetic rings work

EMI absorbing magnetic ring is often used to suppress the interference of power line and signal line, and also has the ability to absorb electrostatic pulse.