A layer of metal Dy was deposited on the surface of NdFeB by magnetron sputtering. After high temperature diffusion, Dy diffuses into the magnet and displaces Nd in the magnet to form a uniform and continuous Nd rich phase. The (Nd, Dy) 2Fe14b phase is formed on the surface of the main phase grain, and the diffusion depth is about 350 μM. The coercivity increases by 52.1% and 32.2% respectively for the 10 mm thick Dy free and low Dy content magnets with 1% Dy (mass fraction). The results show that the coercivity of Nd-Fe-B increases significantly and the remanence of Nd-Fe-B does not decrease.

Since its appearance in the 1980s, sintered NdFeB has been favored for its superior magnetic properties and high cost performance. However, the temperature stability of sintered NdFeB produced at present is poor, which results in the application range of sintered NdFeB being greatly reduced. Increasing the coercivity of sintered NdFeB is a way to improve its high temperature stability. Secondly, the coercivity of sintered NdFeB is far from its theoretical value (6368ka / M) [2], which shows that the coercivity of sintered NdFeB still has a lot of room to improve.
In order to improve the coercivity and temperature stability, the commonly used method is to add heavy rare earth elements Dy or TB to improve the magnetocrystalline anisotropy field of the main phase grains. However, there are two problems in the traditional method of adding heavy rare earth elements: first, the production cost is greatly increased; second, antiferromagnetic coupling is formed between HRE and Fe, resulting in a significant reduction of remanence and magnetic energy product. Grain boundary diffusion (GBD) is a hot research topic in recent years. Heavy rare earth metals or rare earth compounds are wrapped on the surface of bulk or powder magnets by various processes for GBD.
There are many ways to achieve grain boundary diffusion, which can be divided into dry process and wet process. The dry process includes double alloy process [3,4], thermal evaporation process [7,8] and magnetron sputtering, while the wet process includes surface coating process [5,6], electrophoretic deposition, etc. By means of high temperature diffusion, Dy or TB diffuses into the edge of the main phase grain along the grain boundary. At the edge of the main phase grain, Dy or TB preferentially displaces Nd to form higher anisotropy
At the same time, the defects at the grain boundary are reduced, which effectively reduces the formation of reversal domain [10], significantly improves the coercivity of the magnet, and has no obvious effect on the remanence and magnetic energy product.
In this paper, the magnetron sputtering coating method is used to compare a Dy free magnet and a low Dy content magnet. A layer of rare earth film is deposited on the magnet. Combined with the grain boundary diffusion technology, the purpose of improving the performance of the magnet is achieved.

In the experiment, a commercial sintered NdFeB 1# (PR, nd) 31fe67b0.96al0.4co0.3cu0.15 (mass fraction, the same below)) and a sintered NdFeB 2# (PR, nd)) 30.6febalb1Dy0.13al0.5co1.1tb0.11cu0.15 with low Dy content were used to cut the magnet into a cylinder with the size of Ø10 × 10mm. All samples were deposited with Dy layer by magnetron sputtering. Before coating, the magnet needs to be cleaned: after removing the surface grease in the degreasing solution at 80 ℃, pickling with 3% dilute nitric acid solution for 1 min and ultrasonic water for 2 min. The coating equipment is a self-made magnetron sputtering system in the laboratory, and the workpiece is turned over by a manual manipulator to realize the completely uniform coating of the block. The working pressure of the coating is 0.1pA, the power of the target is 100W, and the two targets work at the same time. After coating, the samples were put into a vacuum annealing furnace for diffusion heat treatment. The samples were treated at 900 ℃ for 0.5h-16h, and then tempered at 500 ℃ for 2h.
The demagnetization curves of the samples after diffusion were measured by permanent magnet material measurement system (nim2000) at room temperature, and the changes of magnetic properties before and after diffusion were analyzed. After mechanical polishing, the cross-section and surface microstructure of the magnet were observed under feiquanta feg250 field emission scanning electron microscope (FESEM), and the selected area was analyzed by EDs. D8advanced XRD of Bruker AXS company in Germany was used to compare the structural changes of the samples, and gda750hp of spectroma company in Germany was used to analyze the element distribution along the depth after diffusion.

Fig. 1a and Fig. 1b show the cross-section microstructure of commercial sintered NdFeB-1 magnets without Dy before and after Dy infiltration. In Figure 1a, the silver white area is the Dy film deposited by magnetron sputtering, and the dark gray area is the magnet substrate. In order to clearly observe the composition changes before and after Dy infiltration, line scan analysis was carried out along the depth direction in Fig. 1a and Fig.1b, respectively. The results of composition analysis correspond to Fig.1c and Fig.1D. It is obvious that Dy diffuses into the matrix after high temperature infiltration.

Performance change of the magnet before and after Dy infiltration

Fig. 3 shows the relation curve of magnetic properties with diffusion time after grain boundary diffusion of low Dy and non Dy sintered NdFeB magnets. The corresponding optimal diffusion properties are listed in Table 1. Although the thickness of the magnet is up to 10 mm, the coercivity of the two sintered NdFeB is significantly improved after grain boundary diffusion. With the increase of diffusion time, the increase of coercivity tends to be smooth. The coercivity of the Dy free 1 # magnet increases from 12.30koe to 18.71koe by 52.1%, and the remanence decreases from 13.87kgs to 13.60kgs by 1.9%. However, the coercivity of low Dy 2｛ magnets increases from 16.39 to 21.66 kOe by 32.2%, and the remanence decreases slightly from 13.68 kgs to 13.14 kgs. Obviously, under the same conditions, the effect of Dy permeating without Dy magnet is better. Although the atomic magnetic moment of Dy is higher than that of Fe, the ferromagnetic coupling between Dy and FE results in the decrease of MS in the main phase and the decrease of remanence and maximum magnetic energy product.
Table.1 magnetic properties of two kinds of magnets without diffusion and after grain boundary diffusion 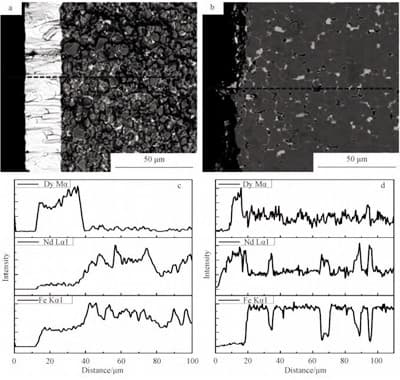 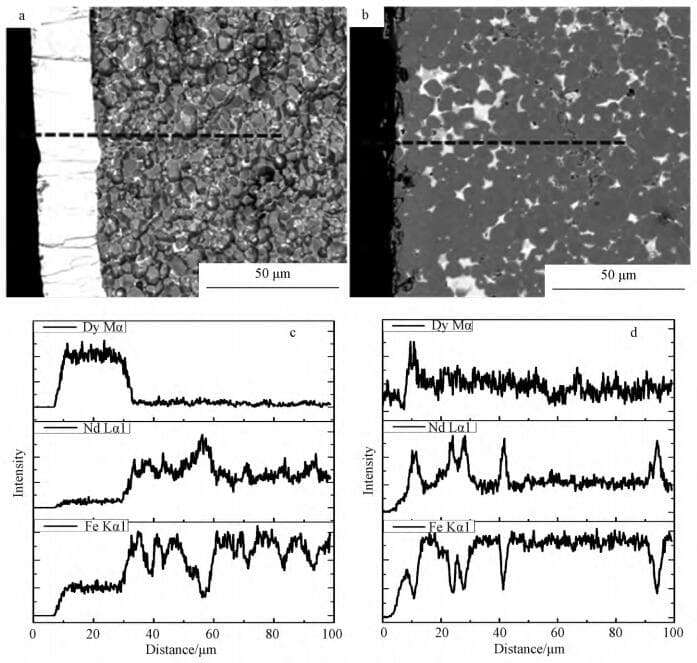 Fig.3 demagnetization curve of the magnet and the relationship between coercivity and diffusion time of Dy magnet by magnetron sputtering
Fig. 6 shows the scanning electron microscope micrographs at 150 μm away from the surface of 1 ᦇ and 2 ᦇ magnets respectively after 10 h Dy infiltration. It is obvious that there is a light gray shell structure about 1 μm ~ 2 μm thick at the edge of the main phase grain, which is consistent with the description in reference [12]. It can be concluded that Dy element diffuses through the grain boundary and enters into the edge of the main phase to replace Nd element in the edge of the main phase to form (Nd, Dy) 2Fe14B. Because the anisotropic field ha of Dy2Fe14B is 15.0t, which is 7.4t higher than that of Nd2Fe14B [13], the coercivity of the magnet forming this shell core structure is effectively improved. In addition, the Nd element is replaced and discharged from the main phase grains, and more Nd rich phases are formed at the grain boundaries, which further supports the phenomenon of increasing Nd rich phases diffused at the grain boundaries. 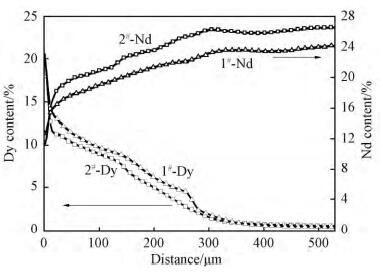 Fig. 4 content distribution of Nd and Dy elements along the depth direction of the magnet

Fig. 5 micrographs of Dy free and Dy containing magnets after grain boundary diffusion
In order to further determine the composition difference between the light gray shell structure and other areas, spot scanning was carried out at different positions. The five spot scanning positions are shown in Fig. 6a, and the composition is listed in Table 2. It can be seen that there is enrichment of Dy element in the shell structure at the edge of the main phase grain, the Dy content is about 5.2% ~ 6.1%, and there is no Dy element in the grain.

XRD analysis before and after diffusion

In order to understand the change of the grain orientation of the magnet before and after diffusion, the grain orientation degree of 1 # and 2 # magnets before and after Dysprosium infiltration was analyzed by XRD, and the results are shown in Fig. 7. It can be seen from Fig. 7 that after diffusion, the degree of crystal orientation of both magnets increases at (006), indicating that Dy preferentially diffuses at (006). At the same time, it is noticed that all diffraction peaks shift to the right, which is due to the preferential substitution of Nd atoms at the edge of the main phase grains by Dy atoms during the grain boundary diffusion process, forming (nd, Dy) 2Fe14B shell phase [15]. Because the lattice constant of Dy2Fe14B is smaller than that of the main phase Nd2Fe14B, according to the blager diffraction formula, the crystal plane spacing D decreases and the θ angle increases, which leads to the change of the diffraction peak position in the XRD pattern Offset.
Table 2 contents of elements at different positions /%

At present, there are many methods to optimize the microstructure and improve the coercivity of magnets by grain boundary diffusion, such as double alloy method, hot evaporation method, immersion method and so on. Compared with these methods, the magnetron sputtering method has several advantages: (1) the film substrate adhesion is good, and the film is compact. The kinetic energy of magnetron sputtered atoms is 10-100 times higher than that of thermally evaporated atoms, so the diffusion layer with better adhesion and denser film can be produced, which is more conducive to the diffusion of Dy. (2) The film thickness can be controlled accurately.
Compared with the thermal evaporation and immersion method, the deposition rate of magnetron sputtering is constant, the quantitative addition of Dy can be realized, and the effective utilization rate of rare earth elements is improved.

The results show that the film / substrate bonding force of the magnet infiltrated with Dy by magnetron sputtering is better, which is more conducive to the diffusion of Dy in the magnet.