To understand and reduce eddy current loss, we should first know how eddy current loss is produced. Here needs to introduce a concept-skin effect (skin effect)
When the alternating current passes through the wire, the current density is unevenly distributed on the cross section of the wire. As the frequency of current changes increases, the current is more and more concentrated on the surface of the wire, and the current inside the wire becomes smaller and smaller. The phenomenon is called the skin effect. 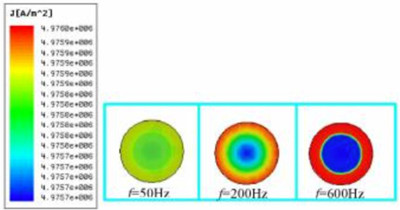 The picture comes from the Internet. The higher the frequency, the stronger the skin effect
The cause of the skin effect is eddy currents. According to the law of electromagnetic induction, an alternating magnetic field will be generated around an alternating electric field. When an alternating current passes through a conductor, an alternating magnetic field will be generated inside and around the conductor, causing a vortex-like induced current inside the conductor. Eddy current is referred to as eddy current.
The closer you are to the center of the conductor, the higher the induced electromotive force generated by the alternating magnetic field in the conductor. The stronger the eddy current, the stronger the hindrance to the original current, resulting in a smaller current density approaching the center of the conductor, but approaching the surface The current density is larger.
Since the induced electromotive force increases with the increase in frequency, the skin effect becomes more significant as the frequency increases. When a high-frequency current passes through the wire, it can be considered that the current flows only in a thin layer on the surface of the wire, which is equivalent to a reduction in the cross-section of the wire, which greatly reduces the effective utilization of the conductor material.

Since the resistance of samarium cobalt and neodymium iron boron permanent magnet is relatively small, the eddy currents in the alternating electric field are generally relatively large. Due to the heating effect of the current, the eddy current will heat the magnet, and thermal demagnetization will occur when the temperature is too high.
The magnitude of the eddy current loss is related to factors such as the changing mode of the magnetic field, the movement of the magnet, the shape of the magnet, the permeability and the resistivity. The higher the speed (equivalent to frequency) and magnetic permeability of rotating machinery, the lower the resistivity, the smaller the skin depth and the greater the loss caused. In the fields of electric vehicles, elevators, etc., in order to control the speed, the permanent magnet motor is usually controlled by the inverter power source. Due to the high harmonics of the carrier frequency, the eddy current loss in the magnet will also increase and cause thermal demagnetization.

From the perspective of motor design, in order to reduce the eddy current loss of permanent magnets in rotating machinery, several technical methods have been proposed, such as shielding columns surrounding the magnets, split magnets and side-isolated magnets.
From the perspective of magnets, one of the most effective ways to reduce the eddy current loss of motors is to use bonded magnets. Because of the presence of the binder and a sufficiently high volume fraction, the resistivity of the bonded magnet is 102~104 of that of sintered magnets. However, the power and maximum operating temperature of the motor are greatly restricted, so the most direct method is to increase the resistivity of the sintered magnet itself.
There are many ways to improve the resistivity of sintered magnets, such as adding high-resistivity powder (Al2O3, etc.), coating SiO2 coating, etc., but these methods will affect the magnetic properties of sintered magnets to a certain extent. In the process, a balance needs to be made between resistivity and magnetic properties.
Source: China Permanent Magnet Manufacturer – www.rizinia.com

Permanent Magnet Manufacturer , rare earth permanent magnet materials , sintered magnet
Share:
PREV： What is a magnetic domain
NEXT： How magnet is made?