Everyone knows that the indicators for measuring the performance of neodymium iron magnets include remanence Br, coercivity HcB, intrinsic coercivity HcJ and maximum energy product (BH)max. In addition, the direction of demagnetization curve and Hk are also magnetic applications Engineers are very concerned about two indicators. Today I will introduce the meaning and influencing factors of these two indicators. 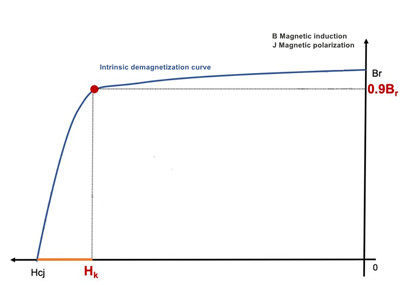 Arguments about the position of the knee

There have been many discussions about whether the demagnetization curve bend point should be Ji=0.9Br or Ji=0.8Br or other positions, and scholars have different attitudes. IEC accepts the definition of Hk proposed by M.Katter, but it only applies to neodymium iron boron magnets with HcJ greater than 400kA/M (5000 Oe). The value of Hk is called HDx, where x represents the reduction percentage on the B axis, for example , HD10 means that the value of HD is 10% below Br, that is, at 0.9Br. (See IEC 60404-8-1:2015)

We use the ratio of Hk to HcJ (Hk/HcJ) to represent the squareness Q of the demagnetization curve. The value of Q ranges from 0 to 1. The closer Q is to 1, the closer the demagnetization curve is to a square (that is, the figure above) The shorter the orange line segment is, the better), usually we consider products with squareness Q>0.9 to be qualified products.
The relationship between squareness and maximum magnetic energy product and recoil permeability

Q=4μ0(BH)max/Jr2, it can be seen that the squareness Q has a positive correlation with the maximum energy product (BH)max of the neodymium iron boron permanent magnet material, that is, under the same Br conditions, the greater the Q, the greater the maximum energy product ( The larger the BH)max, the Q value determines the maximum magnetic energy product (BH)max of the magnet.
Q=1/μrec, the squareness Q is inversely proportional to the magnet’s recoil permeability μrec. The larger the Q, the closer the recoil permeability μrec is to 1, and the stronger the material’s ability to resist interference from influencing factors such as external magnetic field and ambient temperature, the better its stability.

The purity and proportion of raw materials, the uniformity of powder particles, the sintering and pressing process and other factors will affect the squareness of the NdFeB magnet. If the crystal grain grows abnormally or the crystal grain is irregular, the squareness of the magnet will decrease. Some researchers [1] did the effect of rare earth and oxygen content on the squareness of demagnetization curve of sintered Nd-Fe-B magnets and found that:
1. Under the same process conditions, with the gradual increase of the content of rare earth elements, Br decreases, Hcj increases, (BH)max is basically unchanged, and the squareness increases significantly from 92.72% to 98.80%. 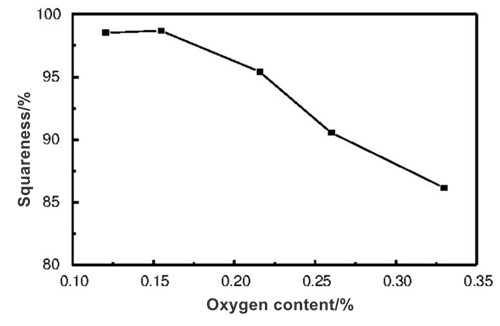