The traditional a motor is composed of stator and mover. The stator and mover are connected by mechanical bearings or have mechanical contact, so there is mechanical friction in the process of mover movement. Mechanical friction not only increases the friction resistance of the mover, makes the moving parts wear and produce mechanical vibration and noise, but also causes the parts to heat and make the lubricant performance worse. In serious cases, the air gap of the motor is uneven, the winding heats up and the temperature rise increases, so as to reduce the efficiency of the motor and finally shorten the service life of the motor. The magnetic levitation motor uses the principle of “the same magnetic field repels the other magnetic field” between the stator and the mover to make the mover levitate and generate the propulsion force to drive the mover to move in the levitation state. Therefore, there is no mechanical contact between the stator and the mover, which can produce higher acceleration and deceleration. The mechanical wear is small, the mechanical and electrical protection is easy, and the maintenance, overhaul and replacement are convenient. It is suitable for harsh environment, extremely clean and pollution-free environment and special needs. More and more attention has been paid to the research of magnetic levitation motor, and its development prospect is encouraging.

Radial magnetic bearing is composed of two radially magnetized coaxial hollow cylinders with opposite magnetization direction. When two magnetized cylinders coincide axially and are concentric radially, the thrust of the magnetic field is zero. When the axis of two magnetized cylinders deviates, because the polarity of the magnetic field in the air gap between the cylinders is the same, an unbalanced repulsive force is generated, which makes the axis of the cylinders tend to be the same. Although this kind of radial magnetic bearing can achieve radial automatic stability, its axial stability is not stable, and when the axis deflects, its angular stability is not good, so its application is limited.

This kind of magnetic bearing controlled by multi degree of freedom electromagnetic force has two degrees of freedom electromagnetic force control systems in horizontal and vertical directions at both ends of the shaft, and the axial direction is controlled by the driving part. When the rotating shaft deviates in the horizontal or vertical direction, the current of the differential excitation coil in the horizontal or vertical direction is controlled respectively. Because the electromagnetic force is related to the size of the excitation coil and the air gap, the rotating shaft can tend to the equilibrium position by changing the electromagnetic force. Although the rotor moment of inertia of this kind of magnetic bearing is small, because the magnetic field generated by the control coil makes the shaft suffer an electromagnetic torque opposite to the steering, and the electromagnetic torque increases with the increase of the speed, so the torque requirement of the drive system is relatively high, which is only suitable for the application of low speed and large torque. The main problem of the magnetic bearing motor is the support force of the bearing, and the driving force still depends on the motor itself. Therefore, although the magnetic bearing motor can achieve independent control of suspension and drive, the system structure size is relatively large, the moment of inertia is large, and the dynamic response of the system is relatively slow, which is easy to cause system oscillation or even unstable operation. 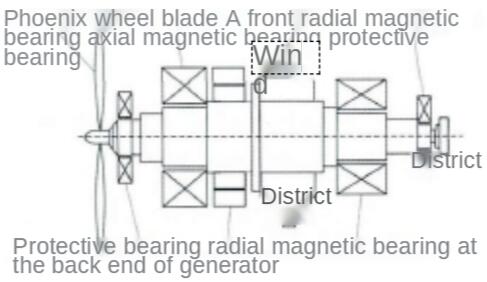 (1)
In the formula: ρ Is the air density; S is the swept area of blade; ν It’s the wind speed. According to the Bates theory, the maximum power on the blade can be obtained

(2)
In the formula: CP is the Bates power factor, CP = 0.593.
It can be seen from formula (1) and formula (2) that in order to improve the conversion efficiency of wind energy to mechanical energy, it can be realized by increasing the swept area of blades and optimizing the design of blades. There are three problems to be solved: ① Increasing the tip speed ratio; ② Selection of blade materials; ③ Design of blade structure.
a. Tip speed ratio is an important parameter to describe the characteristics of wind turbine
To select a parameter, use the λ To express:

(3)
In the formula: V is the blade tip linear velocity; ν It’s the wind speed; N is the rotor speed; R is the turning radius of the wind wheel.
From equation (3), it can be seen that the higher the tip speed ratio is, the faster the blade speed is. In modern wind turbines, 2 to 3 blades are commonly used λ The matching relationship between, λ It varies from 5 to 8.
b. According to the development history of wind turbine blade materials, the blade can be divided into wood blade, aluminum alloy chord blade, steel blade and FRP blade. The application and development of wood blade in wind turbine are limited because it is not easy to be twisted and low strength. In order to meet the requirements of twisted blades and reduce the weight of blades, blades made of steel beam, glass fiber, aluminum alloy and glass fiber reinforced plastic appeared. In the selection of blade materials, the FRP composite materials with good aerodynamic performance and blade strength and stiffness are usually selected. Therefore, the selection of materials will directly affect the ability of wind turbine blades to capture wind energy.
c. Blade structure design mainly includes three aspects: section structure design, ply design and root end design. When FRP material is used to manufacture wind turbine blade, the differences of material strength, elastic modulus and process diversity are important matters needing attention. For example, compared with the blade of hollow metal material, although the elastic modulus of FRP material is lower, its strength is higher than that of metal material, so it can completely replace metal material without changing the overall dimension. However, it is difficult for FRP blade to achieve the same stiffness as metal material. At this time, blindly increasing the blade thickness will inevitably affect the aerodynamic performance of the blade. To sum up, when choosing FRP material to make blade, we always hope to make a thicker blade profile and adopt an open web structure.
Ply design is mainly to determine the amount of fiber and fiber direction. Reasonable arrangement of ply direction, angle and proportion can ensure the aerodynamic load and centrifugal force of blade meet the requirements; The root end design mainly considers that the blade root is the tight joint between the blade and the hub, and the blade fracture often occurs on the blade root. The blade root is designed according to the use of each blade, the structure, size and power of the wind turbine, and its safety factor is larger than that of the blade itself, generally 1.5-2 times larger. In addition, the three-dimensional solid modeling of the blade can be carried out by using the three-dimensional modeling software Pro / E, and the dynamic analysis of the blade can be carried out by using the ANSYS simulation software.

With the continuous progress and development of science and technology, the performance of magnetic bearing is constantly improving. At the same time, due to the integration of electronic components, the cost of magnetic bearing is reduced year by year. Although magnetic levitation products have been successfully applied in many fields after years of exploration at home and abroad, there are still many problems in this technical field, such as the optimization design of control system and the dynamic characteristics of material rotor shafting. In order to improve the control method and strategy more effectively, it is necessary to study the dynamic characteristics of the rotor system while deeply studying the control system, so as to achieve the ideal control of complex rotor.
At present, mechanical bearings are widely used in air-conditioning fans. Mechanical friction will occur between the main shaft and the bearing of the fan, and the motor must overcome this friction to drive the fan blade to rotate. At the same time, it causes the motor to heat and produce large vibration, which reduces the service life of the fan. In order to realize the long-term operation of the fan, the improvement of bearing lubrication system and cooling system is needed. If the magnetic bearing is used, there is no mechanical friction between the stator and rotor, the resistance of the magnetic bearing is zero, and it will not generate heat, so the cooling system and lubrication system are saved, the volume and weight are reduced, the reliability and service life are improved, the mechanical noise is greatly reduced, and the mechanical vibration is also greatly reduced, and the vibration amplitude is far less than that of ordinary fans, The stability of the whole air conditioner is improved.
From the current level of AMB technology, although it has the conditions to be used in normal temperature equipment, there are still two problems: on the one hand, because it is difficult to realize the high-precision control of AMB rotor, the system reliability is poor and the failure rate is high; On the other hand, the lack of standardized product technology.

With the development of VLSI, semiconductor silicon wafers are required to be processed in ultra vacuum and impurity free sealed room, which has strict requirements for the robot conveying silicon wafers: neither lubricating oil nor dust and gas can be produced. Therefore, it is an ideal choice to use magnetic levitation motor to directly control the robot and its control arm. In addition, in the process of IC plate making, magnetic levitation will replace the air cushion floating chip placement.

In the radioactive environment or high temperature radiation environment with serious environmental pollution, such as nuclear waste treatment with speed regulating centrifugal pump driven by magnetic bearing, the problem of mechanical bearing wear and regular maintenance can be solved.

The heart is the perpetual motion machine in human life, once it breaks down, it is difficult to repair. Using artificial heart partially or completely to replace heart function becomes the key to the life extension of patients with heart disease. In the past, the use of mechanical bearing artificial heart blood pump can produce friction and fever, damage blood cells, cause hemolysis, coagulation and thrombosis, and even endanger the lives of patients. Now the centrifugal and vibrating maglev artificial heart blood pump developed successfully in foreign countries adopts the maglev structure without mechanical contact, which not only has high efficiency, but also can prevent the damage of blood cells, causing hemolysis, coagulation and thrombosis. The research of Maglev blood pump is not only to relieve the suffering of patients with cardiovascular disease, improve the quality of life of patients, but also has far-reaching significance for the continuation of human life.

This paper introduces the magnetic levitation motor, which has a series of advantages such as no friction and wear, no lubricating oil pollution, long service life and so on. With the change of market demand and the recognition of user experience, the number of Maglev bearings used in the future will continue to grow and the models will also continue to change. Therefore, we can infer the possible development trend of Maglev bearings in the future: reliable, easy to use, cheap and standardized.
Author: Li Yujia
Source: China Permanent Magnet Manufacturer – www.rizinia.com